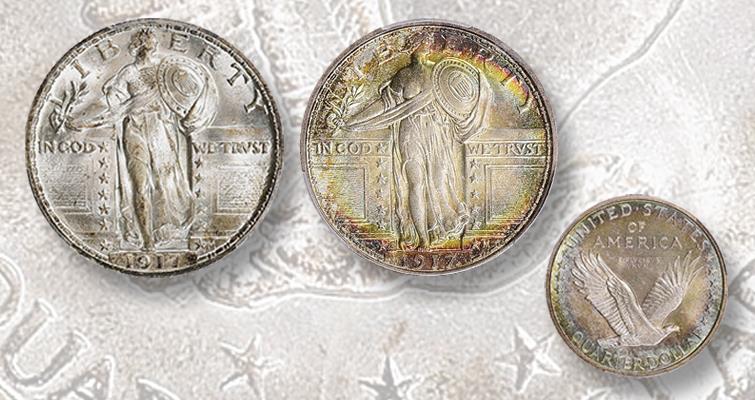 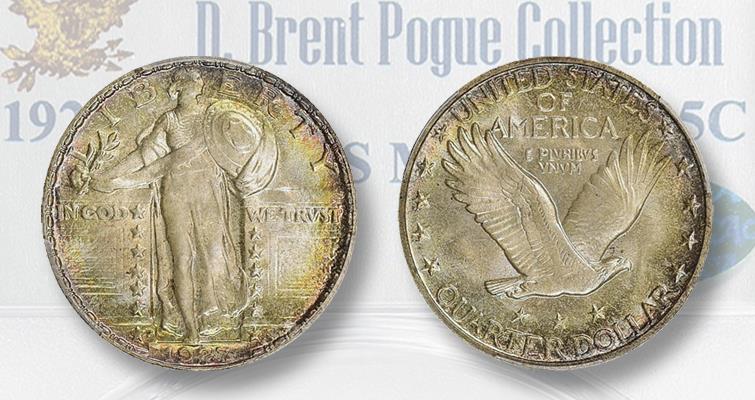 This colorful MS-66+ CAC-approved 1927-S Standing Liberty quarter dollar sold for $24,000 at the 2020 offering of the Pogue Collection and will be offered again on July 31.

The collection currently stands as the number four all-time finest set in the Professional Coin Grading Service Set Registry in the category of Standing Liberty Full Head Quarters with Major Varieties, Circulation Strikes. A look at the PCGS Registry shows that the same collector also has a passion for Walking Liberty half dollars.

The Standing Liberty quarter dollar series is characterized by two major design types. The first type was struck in 1916 to 1917 and features a bare-chested Liberty and no stars below the flying eagle on the reverse. The second type issues continued in 1917 to the end of the series in 1930 and shows Liberty clad in chainmail, and repositions the reverse stars.

The reason for the transition from the first design to the second design in 1917 owes more to issues in striking sculptor Hermon Atkins MacNeil’s design and the demands of mass coin productions than to any idea of an immodest Liberty. Roger W. Burdette — who has dispelled many “numismyths” — wrote in a Jan. 5, 2004, Guest Commentary in the pages of Coin World that after examining thousands of documents on the subject of the U.S. Mint’s silver redesign of 1916 and 1917, “Not one letter or article contemporary with issuance of the coin refers to the obverse design as ‘obscene,’ ‘offensive’ or in any way morally inappropriate.”

The named collection has wonderful examples of both types of 1917-S Standing Liberty quarter dollars.

The Bared Breast coin will be offered on July 31 and is graded Mint State 67+ full head by PCGS and bears a green Certified Acceptance Corp. sticker recognizing quality for the grade. It is one of just three in this grade and designation at PCGS, with none finer, and previously sold for $50,400 at Heritage’s Sept. 17, 2020, offering of the Bob Simpson Collection, where the cataloger noted its rich satin luster. Both sides enjoy colorful toning that circles the reverse in garnet, lemon, teal and rose tones approaching light golden centers.

The collection’s 1917-S Standing Liberty, Mailed Breast quarter dollar graded PCGS MS-67+ full head, also with a green CAC sticker, is set to close on July 24 and is one of just four in this grade at PCGS with none finer carrying a full head designation. It was also part of the Bob Simpson Collection, realizing $84,000 when offered at Heritage’s April 23, 2021, session, where they noted, “Luster enlivens the frosted, nearly brilliant surfaces, while the preservation is nearly flawless,” before commenting on the “needle-sharp strike.”

Beyond the 1916 coin with a mintage of 52,000 pieces, the 1927-S Standing Liberty quarter dollar has the second lowest mintage in the series with just 396,000 struck. Most of these entered circulation and high-end Mint State survivors are rare.

On July 31 GreatCollections will offer one graded MS-66+ by PCGS and bearing a green CAC sticker that was previously offered by Stack’s Bowers Galleries on March 20, 2020, as part of the D. Brent Pogue Collection: Part VII. There, the catalogers praised the soft, iridescent colors, smooth mint frost and bold strike, commenting, “Lovely toning in reddish-copper, powder blue, pale pink and pearl gray is seen on both sides of this appealing Gem.” It sold above the $15,000 to $18,000 estimate, bringing $24,000.

Liberty’s head, while not showing the full articulation of the leaves that is needed for a full head designation, is unusually full and the Semper Fi Collection’s 1927-S Standing Liberty quarter dollar is bested by five MS-67 and two MS-67+ examples as the finest-certified by PCGS without a “FH” designation. 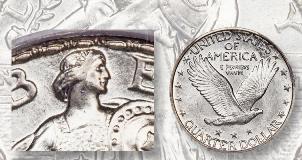 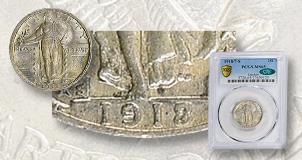 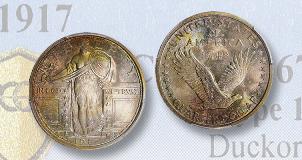