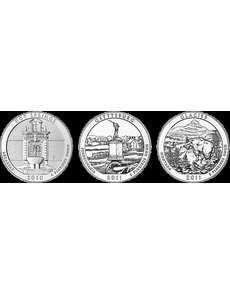 Sales by the Mint of the 27,000 Uncirculated 2010-P Hot Springs National Park 5-ounce silver quarter dollars were inching toward sellout status just a little over a week after the coins went on sale.

As of 9:30 a.m. Eastern Time May 5, Mint officials reported that 26,400 of the coins had been sold. The ratio of orders placed online at the Mint’s website to those placed via the Mint’s contracted order fulfillment center in Indiana.

The U.S. Mint opened sales for the numismatic, Mint-marked versions of the 2010-P Hot Springs National Park coins in the America the Beautiful program at noon Eastern Time April 28, with orders limited to one per household. Sales topped the 20,000-coin mark within 12 hours of the opening of sales, despite a brief outage at the Mint’s website when it was overwhelmed by the influx of orders.

As of press time May 6, the 2010-P coins were still available at $279.95 per coin price. The Mint planned to accept orders above the 27,000 mintage in case earlier orders were canceled for any reason. The additional orders were to be placed on a waiting list and filled in the order in which they were placed.

U.S. Mint officials reported that, as of 11 a.m. Eastern Time May 5, the Mint had recorded sales of 118,900 each of the Gettysburg National Military Park and Glacier National Park 5-ounce silver bullion coins to the Mint’s authorized purchasers. The Mint has announced an initial mintage of 126,500 pieces for each design.

When asked, Gordon Hume, the deputy director for the U.S. Mint’s Office of Public Affairs, said May 5, “The United States Mint does not provide details as to which APs place orders for a particular bullion coin or how many of each.” ■