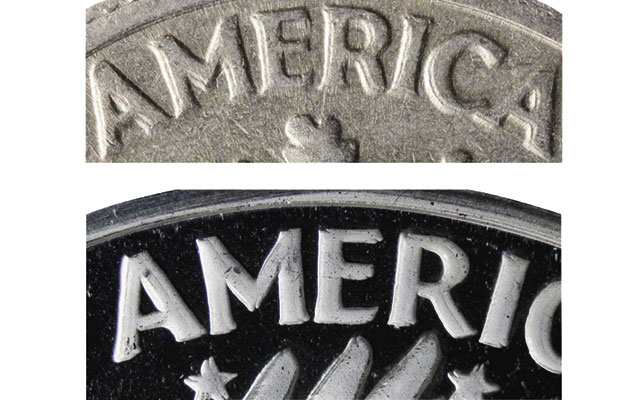 Both this 1970 Roosevelt dime, top, and Proof 1971-S Eisenhower silver dollar, below, show exceptional die doubling on the reverse. Because they are so elusive, they are not well known.

Unlike the dated obverse, U.S. coins’ reverses don’t change every year. That means that when reverse die varieties occur, they can be compared to other examples in a multiyear series. Specialists will therefore sometimes refer to a doubled die reverse (DDR) as “one of the best in the series.” I’ve studied three different reverse dies that are in contention for the title of “best doubled die reverse” in their respective modern series.

A doubled die occurs when, during the manufacture of a coinage die, a working hub impresses two misaligned images of the legends or devices. This doubling is then imparted onto all the coins struck by the die in the same way. In most cases, doubling appears as a small shift on a portion of the design.

Beyond the Lincoln, Memorial cent series — for which the 1983 DDR is considered king — the question of which doubled die reverse is best in each modern coins series becomes more debatable.

My other picks for best of breed doubled die reverses include the 1970 Roosevelt, Doubled Die Reverse dime and the Proof 1971-S Eisenhower, DDR silver dollar.

Among Roosevelt dimes, I like the 1970 variety identified as FS-801 in the Cherrypickers’ Guide to Rare Die Varieties. It has strong doubling on all the reverse legends, especially on the words OF AMERICA. The only example with similarly strong doubling in the entire series is the 1970-D DDR dime, FS-802, but this Philadelphia Mint counterpart is much rarer. In fact the Cherrypickers’ Guide notes, “This variety is extremely rare.”

Numismatic Guaranty Corp. has graded four examples, while Professional Coin Grading Service has graded only one. Its rarity combined with visual drama make it very desirable.

Another really good DDR and possibly the best one in the Eisenhower dollar series is the Proof 1971-S silver-copper clad dollar attributed as FS-801. Doubling is strong and very evident on AMERICA and PLURIBUS.

This variety was discovered only about 10 years ago. To the surprise of many dedicated specialists and despite searching for these coins in Mint holders exhaustively, this variety remains elusive. NGC has certified five, PCGS just two.

Because the dime and dollar seldom trade, they are not very well known. Keep your eye peeled for them, as you might find one.