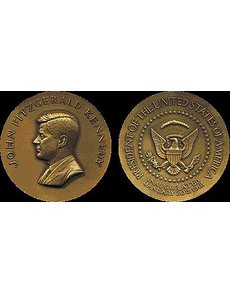 John F. Kennedy inaugural bronze medals were struck by the Medallic Art Co. of New York City in 1961. Shown is an original bronze medal, designed by Paul Manship at the suggestion of first lady Jacqueline Kennedy.

I am a casual collector but would like to get an original 3-inch diameter bronze Kennedy inaugural medal struck by the U.S. Mint in 1961. I want to be sure that it is not a recently made reproduction by the Mint as I know they offer smaller replicas now. Did the Mint make 3-inch replicas, too? I called the Mint but was unable to get a clear answer.

There are some 3-inch medals offered on eBay that are still sealed in plastic, or so they say, but are these originals or replicas? If there are no 3-inch replicas, this will make it easier to have confidence in a selection.

The medal referenced in Mr. Kinder’s letter is from the Mint’s Presidential medal series, which originated in the 19th century. While many of these medals reference the inauguration, they are not the “official” inaugural medals. Official inaugural medals are privately commissioned, designed and sold by the president’s inaugural committee.

Currently, the Mint offers for sale only a select number of bronze presidential medals. These are offered in both 3-inch and 1.3125-inch diameters. The Kennedy medal is currently unavailable.

Whether “restrikes” exist for the Mint’s Kennedy Presidential medal is probably a matter of semantics. The Mint likely struck quantities as needed to fill orders after the initial numbers were struck, but to characterize these additional strikings as “restrikes” is probably unnecessary. “Restrikes” of earlier Mint Presidential medals exist, however, distinguished from “originals” by different finishes.

For a collector seeking an “original” Kennedy inaugural medal struck in 1961, David Alexander writes: “The official John F. Kennedy Inaugural Medal was struck by Medallic Art Company, then based in New York City. It was designed by the late Paul Manship at the suggestion of the First Lady [Jacqueline Kennedy]. Presidential Art Medals (PAM) was a private company based in Englewood (later Vandalia), Ohio. ...

“There have been no restrikes, but there is a lightweight counterfeit made years ago in Hong Kong that has a cheap goldish color and extra lines of type below the eagle. All genuine medals bear the incuse medallic art co. n.y. on the edge.