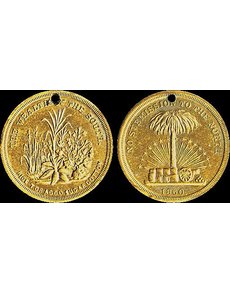 Many questions linger about the production of the curious and somewhat enigmatic 1860 Wealth of the South / No Submission to the North token.

Years ago, before Hard Times tokens were widely studied, the Am I Not a Woman & a Sister anti-slavery token of 1838 was the occasional subject of newspaper articles. The Numismatist, July 1904, noted that every so often the story that only 20 were struck made the rounds, but it also hastened to state that in reality many existed and at the time a quarter dollar would buy one. Other stories had it that these tokens were passes or markers to be used by fleeing slaves traveling north on the Underground Railroad network. This is a nice story, but it has no foundation in fact.

Another token relating to the antebellum South has been one of my favorites for a long time. Usually struck in brass or copper, it bears on the obverse the inscription: THE WEALTH OF THE SOUTH / RICE TOBACCO SUGAR COTTON, with these products illustrated. The reverse shows a palmetto tree with a cannon at its base, and the inscription: NO SUBMISSION TO THE NORTH / 1860. These measure about 22 millimeters in diameter.

Popular in their time, they were struck from a single obverse die (per popular thought) and five different reverses. The engraver was Benjamin C. True, and they were struck in the shop of John Stanton of Cincinnati. I have been studying these since the 1950s, and still some mysteries remain.

J. Doyle Dewitt, in A Century of Campaign Buttons, 1959, states: “The dies for this Confederate token were cut by Benjamin C. True, of Cincinnati. During 1860 and the early days of the war, while communication with the South was open via the Louisville and Nashville Railroad, large quantities of these tokens were shipped by freight and distributed through the South. During the war, all freight was required to pass inspection by the Custom House officers at Cincinnati. Some years after the war, several kegs of these tokens were discovered in the freight office at Cincinnati where they had been detained. The original copies were silvered copper and holed.”

On the other hand, W. Elliot Woodward, America’s most prominent numismatic auctioneer at the time, stated this in his 1884 catalog of the Levick Collection sale:

“About the time that the war broke out these pieces were discovered, and as the date, 1860, preceded the commencement of hostilities, much indignation was expressed that the South, in anticipation of secession, should have issued this token. It was presently discovered that it was the work of a Cincinnati die-sinker, and that it had not been thought of until the war was well under way.”

Are they Confederate tokens? Were they made in 1860? Such are the mysteries of numismatics. More next week.