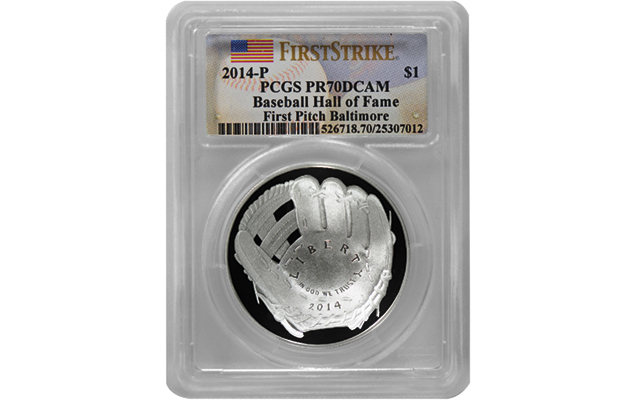 PCGS Proof 70 Deep Cameo “First Pitch Baltimore” labels are reserved for coins sold by the U.S. Mint at the March Baltimore Expo. This example sold for $525 at an April 13, 2014, GreatCollections auction.

The 2014 National Baseball Hall of Fame commemorative program is, without a doubt, one of the most popular commemorative coin issues of the past decade.

Just a few days after the March 27 release, the U.S. Mint sold out of both the Uncirculated and Proof gold $5 half eagle, with a total authorized mintage of 50,000 pieces.

Then on April 10, the Mint confirmed the sellout of 400,000 2014-P Baseball silver dollars at introductory prices of $47.95 for the Uncirculated coin and $51.95 for the Proof dollar. This leaves just the Baseball copper-nickel clad half dollar (with an authorized maximum mintage of 750,000 coins) and the Mint has ample quantities available for these to meet demand for at least the next few months.

On eBay April 14, the least expensive dollars offered were pre-sale dollars (which have ship dates from the Mint to sellers as late as July) that were at the $79.95 level for the Uncirculated coin and $84.95 for the Proof version. Coins that are “in-hand” (meaning that the seller has the coin in stock, ready to ship immediately) are selling for around $10 more.

Several major wholesalers were offering $80 each for Proof and Uncirculated dollars on dealer message boards for coins that could be shipped within the week. This is presumably to make them eligible for Early Release/First Strike programs from grading services, limited to the first 30 days of a coin’s release.

The gold $5 coins are also experiencing handsome markups on the secondary market with dealers paying collectors $725 for “in-hand” or “live coins” that are ready to ship. This is a substantial increase over their initial issue prices of $419.75 and $424.75, respectively, for the Uncirculated and Proof gold $5 coins.

On eBay, individuals are offering both the Proof and Uncirculated Baseball $5 coins — ready to ship — at the $775 to $800 level each.

For coins certified by Professional Coin Grading Service and Numismatic Guaranty Corp., those coins released during the Baltimore Expo are trading at major premiums.

A comparably graded NGC “Opening Day Release” (also from coins the Mint sold during the March Baltimore Expo) brought $4,489 at an April 3 eBay sale, although another one sold for $2,995 on April 1.

The silver dollars are more reasonable, with 2014-P PCGS Proof 70 Deep Cameo “First Pitch Baltimore” dollars selling for around $500 to $525 in recent auctions and MS-70 dollars bringing around $50 less.