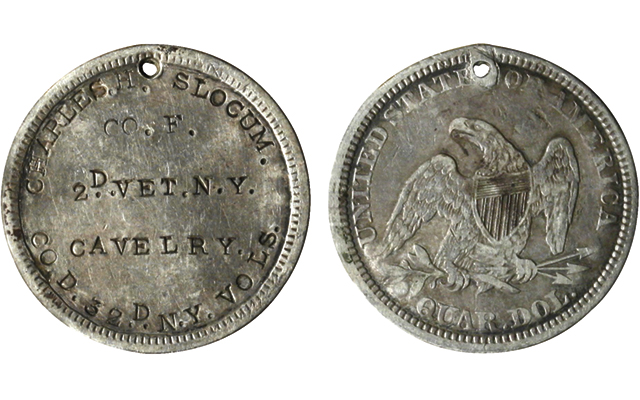 Seated Liberty, No Motto quarter dollar has obverse planed down and counterstamped as a Civil War dog tag.

A counterstamped Seated Liberty, No Motto quarter dollar featured in the most recent issue of The E-Gobrecht is a Civil War dog tag for a Union soldier from New York.

The E-Gobrecht is an electronic publication of the Liberty Seated Collectors Club and is free to LSCC members and others interested in Seated Liberty coinage.

Iowa dealer Brian Greer from Brian Greer Rare Coins submitted images of the obverse and reverse of the counterstamped piece seeking information on the piece.

The obverse of the quarter dollar has been planed down to accommodate the military service information for Charles H. Slocum.

According to the National Park Service’s Soldiers and Sailors Database,  Slocum was a member of Company F, 2nd Regiment, of the New York Veteran Cavalry. The records indicate Slocum entered the unit as a sergeant, but mustered out as a private.

It appears, based on the stamped information on the bottom of the Seated Liberty quarter obverse, that Slocum also saw service earlier for the Union as a member of Company D of the 32nd Infantry Regiment of the New York Volunteers.