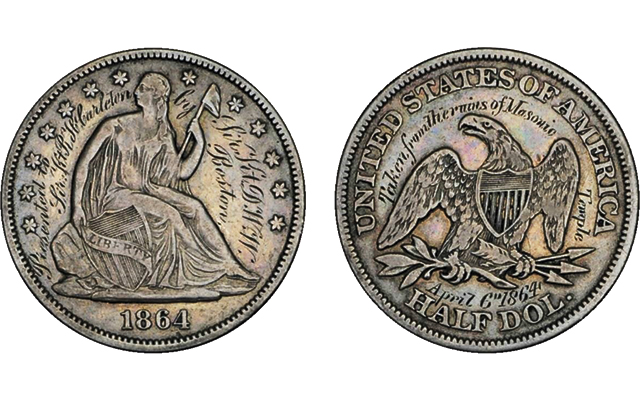 This 1864 Seated Liberty half dollar was struck at the Philadelphia Mint from silver retrieved from the ashes of the April 6, 1864, fire that burned the Boston Masonic Temple to the ground. The coin was then engraved for presentation.

When the Boston Masonic Temple burned to the ground on April 6, 1864, ceremonial silver implements were pulled from the ashes, taken to the Philadelphia Mint and melted for coining into Seated Liberty half dollars.

In The E-Gobrecht, an electronic publication of the Liberty Seated Collectors Club, collector Len Augsburger discusses one engraved relic coin from among approximately a dozen examples known extant.

The engraved 1864 Seated Liberty half dollar Augsburger discussed was, as of June 19, 2014, still being offered by John Kraljevich Americana, but on hold.

The reverse is engraved in script in the field, "Taken from the ruins of Masonic Temple," and "April 6th 1864."

The obverse is engraved "Presented to Sir KT R H Carleton / by / Sir KT D.W.W. / Boston." "KT" is an abbreviation for "Knights Templar." According to Kraljevich, "R H Carleton" refers to Robert H. Carlton, who marched with a plated cornet in the 1868 procession marking the opening of the new Boston Masonic Temple.

One of those who marched with Carlton, according to Kraljevich, was William T.R. Marvin, a co-editor of American Colonial History Illustrated by Contemporary Medals by C. Wyllys Betts and who published the still-standard monograph on Masonic medals, "The Medals of the Masonic Fraternity: Described and Illustrated."