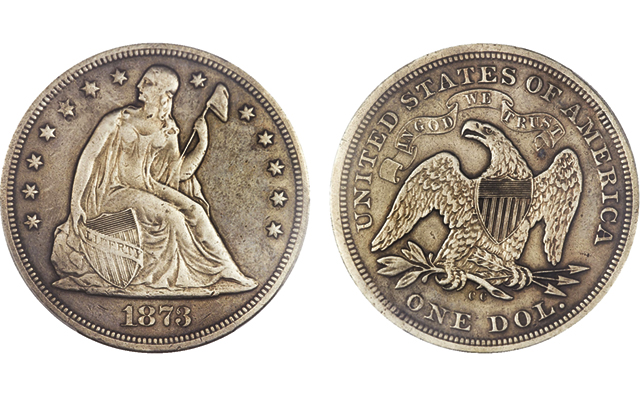 This 1873-CC Seated Liberty dollar graded Very Fine Details, Holed and Plugged sold for the same amount as a problem-free About Good 3 example: $7,050.

The story: A great thing about holed coins is that, often, they allow someone to get a visually handsome coin at a steep discount from what the same coin would sell for without a problem. When a hole is repaired well, the damage is often not visually intrusive.

Such is the case with this 1873-CC Seated Liberty dollar graded by Professional Coin Grading Service as Very Fine Details, Holed and Plugged.

The mintage for the issue was a scant 2,300 pieces and many were likely later melted. It’s a well-known 19th century rarity. The repair on this example is very skillful — from the image of the coin, it is unclear where exactly the piece was holed and then repaired.

Even the best-repaired rarities sell at a fraction of the price as their problem-free counterparts. For comparison, a problem-free VF-25 example sold for $23,500 at Heritage’s March 20 sale of the Donald E. Bently Collection.

Conveniently for our purposes, an About Good 3 example also sold for $7,050 at a July 11 Heritage auction.

With the prices realized at auction for a Very Fine plugged dollar and a no-problem AG-3 example being equal, it is a question of perspective for the buyer as to which coin is more desirable.