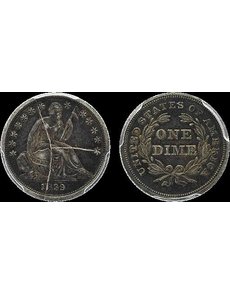 Fortin’s site, on the Internet at www.seateddimevarieties.com, is a fantastic, easy-to-use online resource that’s free and sets up a low barrier of entry for those who seek to explore an interesting series in depth.

Even better: Many of the varieties can still be found — unattributed — in dealer inventories and on eBay.

Fortin explains that when selecting the top 100 varieties for the series, he hoped to expand the size of the Seated Liberty collecting community by raising awareness of an alternate collecting approach for the series beyond date and Mint mark.

The 100 varieties were defined in 2003 and published in the Liberty Seated Collector’s Club’s Gobrecht
Journal. The club established an open registry for collectors to share their collections and to gain exposure for the series.

Fortin aimed to select varieties that would help collectors build an understanding of the die preparation process, die wear and minting conditions in the mid-19th century. He believes that “collectors will become more dedicated to a long-term relationship with a particular series if time is taken to acquire in-depth knowledge about that series.”

Varieties were selected with an eye toward including many die errors that can happen, such as repunched dates and Mint marks, misplaced date punches, excessive die wear and shattering of dies, as well as die doubling during the die hubbing process.

Fortin acknowledged that assembling the set of the top 100 dimes must be an attainable goal and at the same time, “It must be a challenging long-term project that brings about enthusiasm and sense of accomplishment when the set is fully assembled.”

Fortin added, “The Top 100 set is incredibly challenging to complete due to several extremely rare entries.

“I believe that NGC’s recognition of the Top 100 Liberty Seated dime varieties will continue to increase collector awareness for the series,” he said.

He suspects that increased demand may lead to price increases as specialists learn about the rarity of certain Top 100 varieties and as more collectors put together their own Top 100 set. ¦