Searching back in time 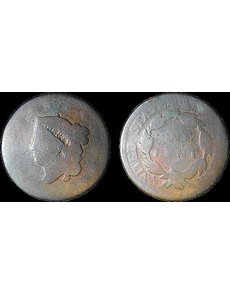 This very worn and dateless Coronet, Matron Head copper cent was found by the author in a roll containing a mixture of Anthony, Sacagawea and Presidential dollar coins.

Finding obsolete coinage while searching through rolls is what many of us strive for.

Any time we unfurl the end of a roll and pour its contents onto our tables, we fervently hope to see some kind of unusual numismatic treasure staring back at us from within the pile of coins that appears before us.

Imagine my surprise recently when a very worn and very old copper piece fell out of a roll of what should have been all United States dollar coins.

While I occasionally find a very old, bronze half penny of Great Britain or Ireland, rarely do I find a United States coin that is as obsolete as the U.S. large cent illustrated here.

Although extremely worn, this dateless U.S. large cent can still be identified as a subtype known by collectors of old 100 percent copper coins as a Coronet, Matron Head cent.

The obverse was designed by Robert Scot and the reverse by John Reich. This design was struck from 1816 through 1839.

The obverse bears a design of an older, more matronly looking Liberty (thus the Matron Head name) facing to the left and wearing a coronet. The Coronet design was introduced in 1816 in somewhat different form.

In the case of unworn examples, 13 stars would be seen encircling Liberty’s head with the date placed under the bust.

Of course, on this particular coin, those details are almost obliterated. Still, we can see most of the word LIBERTY as it appears on Liberty’s crown.

The design on the reverse of these coins includes the legend UNITED STATES OF AMERICA encircling a wreath. Inside the wreath the denomination ONE CENT is spelled out with the word ONE above the word CENT. The word CENT also has a line under it.

On the example shown above, remnants of the legend can be seen to the left. A few letters of ONE CENT are also still visible.

There is no doubt that this old large cent saw some heavy circulation but even with the details as flattened as they are, this coin is still an unusually appealing example of a early large cent.

Keeping in mind that this coin was found amongst a group of Anthony, Sacagawea and Presidential dollar coins, I continue to be fascinated by the great coins that can be found in rolls.

While this coin is not worth a fortune financially, it has a value to me far beyond the potential dollar amount that can be attributed to a find of this type. After all, how often do you get to say that you found a U.S. large cent in a modern roll of coins?

Email me with your finds at foundinrolls@netscape.net. I like to hear about your finds.