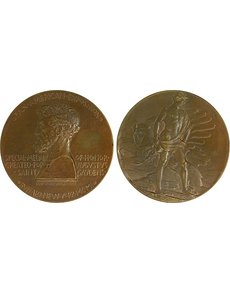 The 1901 Pan American Exposition in Buffalo, N.Y., may be best remembered as the site of the assassination of President William McKinley by anarchist Leon Czolgosz. The murder blighted an exposition that had been planned as an international celebration of art and architecture.

Upstaging MacNeil’s work to some degree was an impressive 91.5-millimeter Special Medal of Honor Created for Augustus Saint-Gaudens, a truly extraordinary medal sanctioned by the exposition and the artists represented at the Buffalo event. Rarely encountered today, this massive medal was designed by James Earle Fraser (born 1876, died 1953).

U.S. Mint Chief Engraver Charles E. Barber’s cavalier treatment of Saint-Gaudens’ World’s Columbian Exposition official award medal design in 1893 aroused great artistic controversy. And it is possible that the Special Medal of 1901 was intended in part to show the art world’s unwavering support of Saint-Gaudens after the ugly treatment he received over his 1893 medal.

The obverse of Fraser’s 1901 medal presents a herm bust facing left, an ancient style showing the shoulders cut off sharply and following the straight sides of the pedestal below. The sculptor’s bearded head with tousled hair is framed by legend PAN AMERICAN EXPOSITION, BVFFALO NEW YORK MCMI. The reverse is purely classical with an ancient sculptor standing with mallet and chisel against a background of the winged horse of inspiration, Pegasus.

Barbara Baxter noted in her 1987 book, The Beaux-Arts Medal in America, “There is nothing in Fraser’s design that marks it as specifically American,” in sharp contrast to the MacNeil expo medal.

If Fraser had sought an “American” design he was certainly qualified to produce one. He was later famous for his Indian Head 5-cent coin with its American bison reverse.

He subsequently married a talented young art student, Laura Gardin, in 1913, and the couple formed an unbeatable artistic team that brought the Oregon Trail half dollar to the canon of U.S. commemorative coinage.

The Saint-Gaudens Special Medal of Honor is decidedly elusive today, but it is not the only collectible medallic portrait of the great sculptor. His erstwhile assistant, John Flanagan (born 1865, died 1952), designed a more collectible plaquette for the Medallic Art Co.’s 1933 Sculptor’s Dinner that presented a high-relief Saint-Gaudens bust.