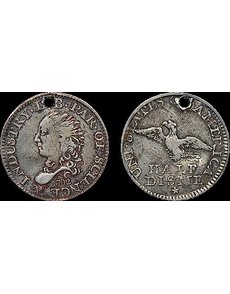 The hole that was punched into this 1792 half disme to be offered at auction Oct. 18 in St. Charles, Mo., was likely a contemporary alteration. 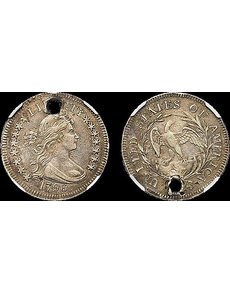 The 1796 Draped Bust, Small Eagle quarter dollar is a one-year type and this piece may still be considered desirable to some collectors despite the hole.

The auction at the St. Charles Convention Center is being held in conjunction with the Oct. 16 to 19 Silver Dollar and Rare Coin Expo.

A 15 percent buyer’s fee will be added to the final closing hammer price of each lot won.

Despite having holes punched into them, two coins in the auction are still desirable to collectors because of their rarity and popularity.

The coin is certified Professional Coin Grading Service Genuine, Very Fine Details, Contemporary Hole. The hole pierces the I in the LIB. abbreviation for “Liberty” on the obverse, extending through the F in OF in UNITED STATES OF AMERICA on the reverse. The auction lot cataloger describes the coin as exhibiting “some glossy texture” due to cleanings.

An estimated 1,500 to 2,000 pattern pieces were reported to have been struck. The coins may have been produced in two strikings, one at a private location before the construction of the Philadelphia Mint facility, and another within the Mint structure.

Another holed coin that is also a rarity is Lot 627, a 1796 Draped Bust, Small Eagle quarter dollar, Browning 2 (Early Quarter Dollars of the United States 1796-1838 by A.W. Browning). It is certified by Numismatic Guaranty Corp. as About Uncirculated Details, Holed.

The hole is positioned in the BER of LIBERTY above the portrait on the obverse, through the ribbon of the wreath on the reverse.

Hogge money coins are identified as the first coins struck for English colonies in the New World. The circa 1616 token coinage was produced for the chain of islands today known as Bermuda. At least four denominations were struck as a circulating medium — twopence, threepence, sixpence and shilling (or twelvepence), with the threepence the rarest.

The “Hogge money” name derives from the coins’ design, which depicts a wild boar or hog on one side. Hogs proliferated on the islands after being unloaded there during the early 16th century. The other side of the Sommer Islands token coinage depicts sailing ships, with varieties known based on the size of the sails and portholes.

The Hogge coins are sometimes called Sommers Islands coinage, so named for Adm. Sir George Somers, leader of a 1609 expedition to supply the Jamestown colony in Virginia. The ship on which Somers sailed was instead shipwrecked on the Bermuda chain. Afterward, the islands were called the Sommer Islands.

The pattern, once part of the numismatic collection of Willis H. duPont, is believed known by no more than two pieces.