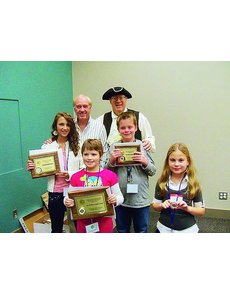 The South Carolina Numismatic Association held its 39th annual convention and coin show at the TD Convention Center in Greenville, S.C., Oct. 28 to 30.

Greg Stowers, outgoing president of the SCNA, cut the ribbon at the Friday morning opening ceremony. The Greenville and Parker Coin Clubs provided volunteers and helped stage the event alongside the officers of the SCNA.

The bourse offered 99 tables with more than 70 dealers, and more than 1,000 collectors attended the show, according to the SCNA. Dealers reported lively sales, with gold and silver bullion leading the way, although collector coins were not far behind, the show sponsor reports.

A Young Numismatist program was spearheaded by Bob Hartje on Saturday morning, Oct. 29, and two adult programs were presented in the afternoon the same day. During the latter programs, Randy Campbell of Independent Coin Grading Service gave a talk titled “5 Ways to Make Yourself a Better Coin Grader” and Tony Chibbaro offered a PowerPoint presentation on “The Numismatics of Fort Sumter.”

Several SCNA members were acknowledged at the Sunday morning banquet, including Arthur Darr who received the Numismatist of the Year award for his ongoing support of young numismatists throughout the state. This was the fourth year that Darr hosted the YN table at the convention.

The Myrtle Beach Coin Club was recognized as the Club of the Year for its “fine work in the Pee Dee area of the state,” hosting two coin shows each year and donating much of the proceeds to local charities. SCNA Literary Awards were presented to Ernie Turnes of Myrtle Beach and Robert W. Ross III of Wilmington, Del. Both authored articles for the association’s newsmagazine, the SCanner.

The South Carolina Numismatic Association is a nonprofit organization and has more than 300 individual members and 12 member clubs. It hosts a yearly convention and publishes a journal, the SCanner, three times a year. For more information, visit www.sc-na.org or call a club representative at 803-530-3668. ¦