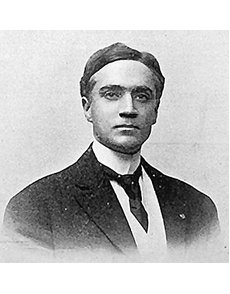 If coin dealer Thomas Elder (above) liked you, he was a fierce friend; if he disliked you he was just plain fierce.

But then I incorrectly wrote that all 10 copies had vanished immediately afterwards. It was John W. Adams who proved me wrong. And there is no better teacher to give you a schooling about numismatic literature.

When Quarterman Publications reprinted Numisgraphics in 1976, it asked Adams to write the foreword and to provide a rarity and valuation guide to the catalogs listed within.

Numisgraphics covered only those catalogs published prior to 1876; so Adams finished the job Attinelli started, writing United States Numismatic Literature Volume One (covering the 19th century), and a second volume (covering the 20th century), which have become the numismatic catalog collectors’ “bibles.”

For each of the major catalogers, Adams lists the names and dates of their sales; the consignors; number of lots; a description of the contents; and a letter grade for overall quantity. Trying to collect American coin auction catalogs without Adams’ two books is like trying to collect U.S. coins without Coin World’s Guide to U.S. Coins Prices & Value Trends.

So what did he know that I didn’t? Not all large, paper copies disappeared from the face of the earth after the Idell sale in 1878, for Adams discovered that, at the height of the Great Depression, coin dealer Thomas Elder sold one. Elder was a genuine piece of work. Numismatically knowledgeable, fearless and outspoken, Elder also possessed a temper as explosive as nitroglycerin.

If Elder liked you, he was a fierce friend; if he disliked you (and he disliked many), he was just plain fierce. It is one of the great ironies of numismatics that after he retired from the coin trade, Elder moved from New York City to an upstate town named Pleasantville.

All of the regular issue copies of Numisgraphics are octavo in size while a quarto book is considerably larger; about the same height and depth as an encyclopedia volume (and about the same size as the “royal octavo” that Attinelli described in the Idell sale).

So Elder was selling one of those 10 large paper copies. The notation that the pages were loose probably meant that they were unbound. Adams’ find proves that at least one of the large paper copies of Numisgraphics survived 54 years after the Idell auction.

But the great mystery remains: Where are these large paper copies today? How could every example vanish? And who will be the first collector to make headlines by unearthing one?