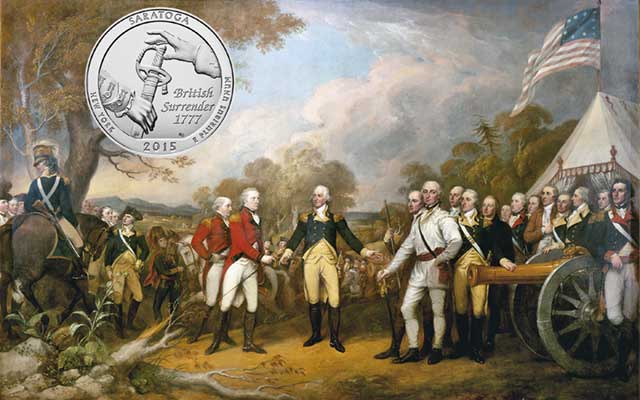 The stage backdrop for the Nov. 17 coin launch ceremony for the 2015 Saratoga National Historical Park quarter dollar will be a 21st century tableaux vivant of American painter John Trumbull’s 1821 painting, 'Surrender of General Burgoyne' a 1777 event that occurred at Saratoga. Illustrated is Trumbull’s painting with the quarter dollar superimposed.

The official launch ceremony for the 2015 Saratoga National Historical Park quarter dollar in New York is scheduled for Nov. 17 in Schuylerville, N.Y.

The 9:30 a.m. Eastern Daylight Time ceremony is slated to be held at Schuylerville High School, 14 Spring St., adjacent to the Saratoga Town Hall in Schuylerville.

Following the official coin launch ceremony will be a coin exchange, during which the public may exchange cash for 40-coin, $10 face value rolls of Uncirculated, circulation-quality 2015-P Saratoga National Historical Park quarter dollars. The Glen Falls National Bank, 73 Broad St. in Schuylerville, is sponsor of the coin exchange.

Trumbull’s original 12-foot-by-18-foot painting has been on display in the U.S. Capitol Rotunda where it was first placed in 1826.

The tableaux vivant was originally executed by Schuylerville artist Susan Reynolds in 2002 for the 225th anniversary celebration of the British surrender.

Re-enactment actors in period garb were placed in the same positions as characters depicted by Trumbull in his 1821 painting, and photographs were taken from which Reynolds rendered the scene.

On Nov. 16, from 5 to 6 p.m. EDT in the Schuyler Room of Saratoga Town Hall at 12 Spring St. in Schuylerville, the U.S. Mint will host a coin collectors forum for anyone interested in U.S. coinage.

The venue is approximately 1.5 miles from the actual location of the surrender referenced on the quarter dollar.

The 2015 Saratoga National Historical Park quarter dollar is the 30th of 56 coins to be released through the America the Beautiful Quarters Program.

The design depicts a close-up of the moment Gen. Burgoyne surrendered his sword to Gen. Gates, a turning point many believe marked the “beginning of the end of the American Revolutionary War.”  Inscriptions are BRITISH SURRENDER 1777; SARATOGA,”; NEW YORK; 2015; and E PLURIBUS UNUM.

The coin is to be released into general circulation through the Federal Reserve Banks and member financial institutions on Nov. 16, the same date the coins will be offered in bags and rolls as numismatic products from the U.S. Mint.