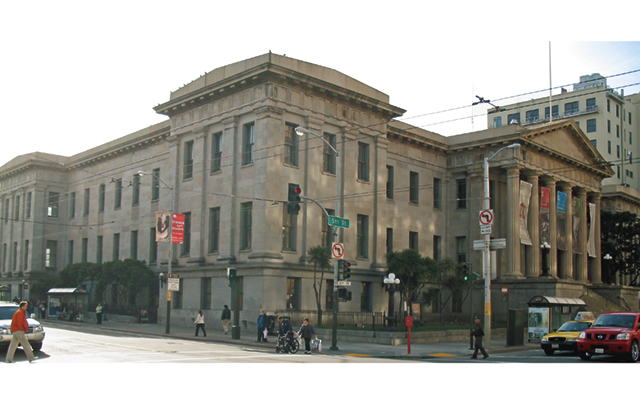 The City of San Francisco is kicking the nonprofit San Francisco Museum and Historical Society out of the Old Mint as the latter’s plan to renovate the building into a museum has stalled.

A dramatic arts production company will use the facility on a short-term basis beginning Sept. 1.

In the letter, Updike commends the historical society for, by opening part of the building for events and rentals, providing the public “a glimpse of what this treasure can and should become.”

“Unfortunately,” the letter continues, “the vision described in the agreements between the City and SFMHS for the Old Mint—first in 2003 and then in 2006—contemplated a number of critical milestones in improving this community asset, and SFMHS has not been able to meet those milestones or implement this vision.”

While the lease has been terminated, Updike’s letter says the historical society has until Aug. 1 to vacate the property.

The president of the San Francisco Museum and Historical Society’s board of directors, Kevin Pursglove, said the organization had previously been made aware by the city about the possibility of the production company moving in temporarily, but was still “a little bit disappointed” upon receiving the letter from Updike.

However, the San Francisco Museum and Historical Society is not closing up shop. Pursglove said it is looking for a temporary office space while “regrouping and restrategizing” and focusing on ways to increase its fundraising.

MORE: Nonprofit hopes to return to Old Mint to carry out museum plan

Pursglove's been told the city will be seeking a tenant through a public request-for-proposal process after the production company leaves, and his organization will look to win the lease again.

Donald Kagin, a professional numismatist and president of Kagin’s Inc., is a strong supporter of the plan to incorporate a numismatic museum into the renovation plan of the Old Mint.

He said he’s not surprised to hear that the city is kicking the historical society out for now, and he didn’t sound too upset about it.

Kagin and the family firm have had a long relationship with the Old Mint that has included direct sponsorship of numismatic exhibits dating from more than 40 years ago.

The Clifford-Kagin Collection of pioneer gold coinage was on exhibit at the Old Mint while it was still part of the Bureau of the Mint. The collection, originally formed by pioneer gold specialist Henry Clifford, was purchased by the Kagin family in the 1970s. At the time, it was widely considered the finest such collection outside of the Smithsonian Institution. Both Donald Kagin and his father, Arthur Kagin, continued to add important pioneer gold coins to the collection while it was on public display at the Mint facility.

The family sold the collection to two other coin dealers in 1989, who kept it on display until 1990.

More recently, the Kagin family and the family business have worked at gaining funding for a public museum. For example, in 2014, when coins from the Saddle Ridge Hoard were sold by Kagin’s, the firm arranged for the couple who found the hoard in 2013 to donate some of the proceeds arising from the sale of the coins. The first gold coin sold from the hoard, an About Uncirculated 53 1874-S Coronet $20 double eagle, brought $15,000 at a fundraising event May 27 at the Old San Francisco Mint just hours before the coins available from the hoard were placed on public sale. The money went the museum society.

Collectors raised funds for the museum in other ways. In 2006, the United States Mint struck gold and silver commemorative coins for sale to collectors, who paid surcharges totaling nearly $5 million that went to The Mint Project, an effort at forming public exhibits at the Old Mint.

The silver dollar and gold half eagle in the commemorative coin program both featured scenes of the Old Mint.

The first San Francisco Mint was opened in 1854 to convert mined gold into coins.

According to the U.S. Mint website, approximately $4 million in gold bullion was turned into United States coins the first year alone.

Operations moved to the Old Mint, or the “Granite Lady” as it’s known, in 1874. Coins were struck there until 1937, when coining was moved to the present San Francisco Mint.

In 2003, the U.S. Government Service Administration sold the Old Mint for $1 to the city, which in turn leased the facility to the historical society. The historical society planned to turn it into a San Francisco history museum, a part of which would celebrate the history of American coins and the Gold Rush.

Senior Editor Paul Gilkes wrote in a May 2, 2014, post that the San Francisco Museum and Historical Society had by that time raised more than $14 million to develop the building for exhibits and events. Pursglove said the goal after the historical society regroups is to up that fundraising total to around $40 million.

Though the historical society’s plan may not come to fruition, Donald Kagin said he thinks a renovation of the Old Mint will happen eventually, and no matter what shape the overall plan takes, the Gold Rush museum will be a part of it.

“It needs to be done. I believe it will be done,” Kagin said.