San Francisco Mint set to be made to order 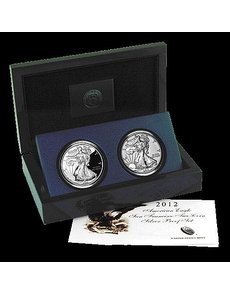 To mark the 75th anniversary of the current San Francisco Mint facility, the U.S. Mint production facility will strike Proof and Reverse Proof 2012-S American Eagle silver dollars for a commemorative two-coin set that goes on sale for a four-week period later this year.

The set will comprise the two coins encapsulated and packaged together in a custom-designed, highly polished, lacquered hardwood presentation case and accompanied by a certificate of authenticity. Both coins will bear the “S” Mint mark of the San Francisco Mint.

The U.S. Mint also offers a Proof 2012-W American Eagle silver dollar as a separate numismatic product, but that coin is struck at the West Point Mint.

According to Tom Jurkowsky, director of the U.S. Mint’s Office of Public Affairs, the two-coin sets will be produced to demand, allowing all customers who place orders during the designated time to acquire the set.

Jurkowsky said April 23 that U.S. Mint officials re-evaluated how it brings special products to market, based on feedback from customers concerning the sale of the 2011 American Eagle 25th Anniversary Silver Coin set.

As a result, the U.S. Mint is giving customers the opportunity to order this special product without ordering limits and for a specific time period only, Jurkowsky said.

Customers will have the opportunity to order the 2012-S two-coin set for a longer period without facing a near-immediate sellout like that experienced with the American Eagle 25th Anniversary set, Jurkowsky said.

Initial pricing for the sets will be established close to the on-sale date based on the market price of silver at the time, and will be evaluated weekly during the sales period.

Jurkowsky said all orders accepted will be processed and fulfilled on a first-in, first-served basis, according to existing United States Mint policies.

For the first time, the U.S. Mint will place a “sales odometer” on its website at www.usmint.gov to track daily sales of the set during the ordering window from June 7 to July 5. Jurkowsky said updates would be posted at 3 p.m. EDT each day from Monday through Friday during the four-week ordering period. ¦