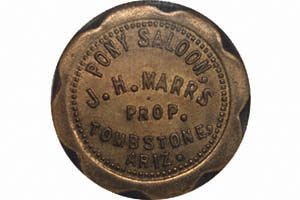 The Pony Saloon was located in Tombstone, Arizona Territory. James H. Marrs opened the saloon in the late 1800s. The brass token was “good for” 12½- cents when spent at the saloon.

Tombstone is a name that resonates with fans of the American west. The Arizona town was founded in 1879 by Ed Schieffelin in what was then Pima County, Arizona Territory. The town grew largely because of the town’s mines which produced millions of dollars worth of silver bullion, the largest productive silver district in Arizona.

Tombstone is also known as the site of the gunfight at the O.K. Corral. The Earp brothers—Virgil, Wyatt, Morgan and Warren Earp—arrived in Tombstone around 1880. They had ongoing conflicts with outlaws Ike and Billy Clanton, Frank and Tom McLaury. The conflict eventually escalated into a shootout Oct. 26, 1881 during which the lawmen killed Tom McLaury, Frank McLaury, and Billy Clanton. They were buried in the town’s Boothill Graveyard.

For more information about this item and other lots in the auction visit the auction website at www.FHWAC.com or telephone the firm at 775-825-1624.