Sales of Gobecht dollars in FUN auction to benefit ANS 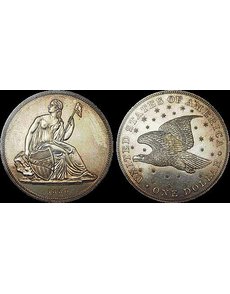 This 1836 Restrike Gobrecht dollar, Judd 60, is graded Proof 62. It is one of five pieces to be offered at auction in January to benefit the American Numismatic Society.

A selection of five Gobrecht dollars from the Dr. Julius Korein Collection will be offered during Heritage Platinum Night & Signature Auctions Jan. 8 to 14 in conjunction with the Florida United Numismatists convention in Orlando.

The coins are duplicates from a 2009 bequest to the American Numismatic Society from Korein, who died Nov. 12, 2008.

The coins are being offered on behalf of the society to benefit the Chair of North American Coin and Currency of the ANS.

The Korein Collection is described as the most comprehensive collection of varieties of the Seated Liberty pattern dollars designed in the late 1830s by U.S. Mint Assistant Engraver Christian Gobrecht. The collection was assembled by Dr. Julius Korein, a neurologist famous for his research on brain death.

The coins to be offered, all examples of the Judd 60 pattern (United States Pattern Coins by J. Hewitt Judd, edited by Q. David Bowers), include:

? An original 1836 Gobrecht dollar, graded Extremely Fine details by ANACS, 414 grains, in die alignment I (reverse oriented with the center of Liberty’s head on the obverse opposite the DO in DOLLAR on the reverse.)

? An 1836 Gobrecht dollar restrike, graded Proof 55, 415.6 grains, in die alignment II (reverse oriented in medallic alignment, with the head of Liberty opposite the ES in STATES on the reverse.

? An 1836 Gobrecht dollar restrike, Proof 62, 414.7 grains, in die alignment IV (reverse oriented with the head of Liberty opposite the word OF on the reverse).

“Dr. Korein’s donation of his collection of Gobrecht dollars was one of the most amazing gifts of the last decades and a high point in the development of our fabulous cabinet of US coins,” according to Ute Wartenberg, ANS executive director. “He was fully aware of how many lesser duplicates he owned, and he asked us to sell them over time in order to increase the endowment of the US Chair of the society. His most generous bequest has ensured not only that we now possess the pre-eminent collection of these spectacular coins but also will help to fund more activities in the field of US numismatics at the society.”

ANS curatorial staff, in consultation with numerous experts on Gobrecht dollars, examined the collection over many months and ultimately selected for sale more than 50 duplicates, which were all inferior to other coins in the collection. The ANS’s collection will retain over 40 pieces, which remains the largest and most comprehensive collection of Gobrecht varieties in any public collection, according to the society.

Two Gobrecht dollars were sold in the January 2011 Americana Sale by Stack’s, and four coins were sold in November 2012 at Numismatica Genevensis SA in Geneva, Switzerland, according to the news release. Those sales added over $90,000 to the endowment, specifically to cover salary and other costs of the North American Curator at the ANS. According to the society’s guidelines on deaccessioning, all coins will be sold at public auction.

Also available from Heritage is a comprehensive reference titled Gobrecht Dollars: Illustrated by the Collection of Julius Korein, M.D., published by Heritage Auction Galleries and Ivy Press in 2009. The book is a compilation of the best known writings on Gobrecht dollars and is based upon a series of three articles written by Jim Gray and Mike Carboneau in 1991, 2000 and 2001 and expounded upon by those two writers, along with scholarship by Mark Van Winkle, John Dannreuther and Saul Teichman. The book brings together the most up-to-date findings about Gobrecht dollars based on the coins themselves as primary sources, rather than using secondary sources (some of which date to 1860).

The 136-page book provides detailed, up-to-date information on each design variant, including alignment, mintage, rarity, weight, pedigree and description of each of the coins bequeathed to the ANS by the late Dr. Korein. The book includes more than 100 black-and-white and color images.

Orders can be placed online at www.HA.com/GobrechtDollars for the Gobrecht dollars book. Each copy is priced at $75.