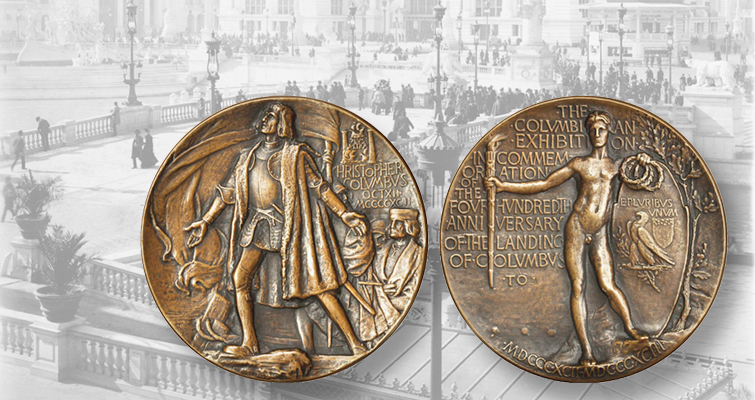 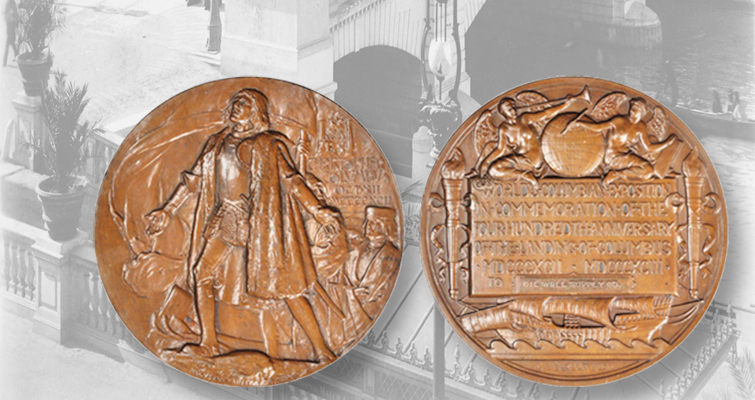 The 1893 World’s Columbian Exposition was the largest world’s fair ever held, with exhibitors from 46 countries and over 27 million visitors. Many companies used this fair as an opportunity to showcase and gain international recognition for their products. The event is well known to coin collectors because of the 1892 and 1893 commemorative half dollars celebrating it, along with the 1893 Isabella quarter dollar.

In a departure from previous world’s fairs, the award medals for the Columbian Exposition were not given on a competitive basis — they were a single class, struck in bronze and presented to each exhibitor. Although some exhibitors offered to pay for gold or silver copies, only bronze medals were struck.

Saint-Gaudens initially turned down requests to design the World’s Columbian Exposition award medal, but eventually relented and accepted the commission and the generous $5,000 fee. His obverse depicted a full-length figure of Columbus landing on the soil of the New World.

The artist’s initial reverse featured a nude male youth representing the young spirit of America, but this design was not accepted by the United States Senate Quadro-Centennial Committee. Variant designs prepared by Saint-Gaudens and his brother Louis with a more modest figure were also rejected, and ultimately, Saint-Gaudens’ obverse was paired with a reverse design by Charles E. Barber, longtime chief engraver at the U.S. Mint.

Barber did not appreciate outside artists meddling in the day-to-day business of the mint, and sculptors perceived Mint engravers as inferior talents. Saint-Gaudens wrote that he accepted the commission largely to keep the design out of the hands of Barber.

Saint-Gaudens’ son Homer would refer to Barber as the “commercial medalist” and by October 1894, Augustus Saint-Gaudens would give up on his efforts to make a reverse design, conceding the design to Barber. Contemporary observers noticed the disconnect between the lyrical obverse and the perfunctory reverse. An article in the April 1896 American Journal of Numismatics observed, “While there is dignity and devotion finely expressed in the figure of Columbus … the general effect of the medal, as a specimen of the highest attainment of American numismatic art, is … hardly up to our hopes.”

Saint-Gaudens’ original reverse design remains today through a handful of drawings, models and plasters and several medals, including the offered one. Stack’s Bowers believes that this is the only two-sided bronze medal with the nude reverse in private hands. The exact origins of this medal are unknown, but the auction house notes similarities to another medal of similar size and appearance in France’s Musee d’Orsay that was presented to the museum by Saint-Gaudens in 1899. The sculptor had ordered medals in several sizes using his original reverse conception, from medal engraver Ernest Paulin Tasset.

Unlike the French museum’s medal that carried the name “Williams Bradford” in the area where an individual medal recipient’s name would be placed, the offered medal appears blank in this area that offers some clues to its origins. The description observes, “faint vestiges of the tops of WILLIAMS are visible around the bottom of the torch and the word ‘TO,’ indicating that this casting was taken from the mold after the awardee’s name was mostly effaced.” The auctioneer believes that it was also made by Tasset in the 1890s and notes that the medal remained in France until it was brought to the United States earlier this year, adding, “Clearly made by a skilled artisan, this specimen features a patina of light golden tan and deeper brown and rings like a bell when lightly tapped on the edge, the mark of a fine cast.”

As Stack’s Bowers summarized, “This ... casting of Saint-Gaudens’ medal is the Holy Grail of World’s Columbian Exposition numismatics, and is an important piece in numismatic history as it is symbolic of the ongoing chasm between Saint-Gaudens and the US Mint, represented by Barber, that culminated in the great Saint-Gaudens/Roosevelt coinage redesign of 1907.”

The March 26 online session featured three of the medals that were awarded to exhibitors, having the Saint-Gaudens obverse paired with the Barber reverse. One of these sold for $240. 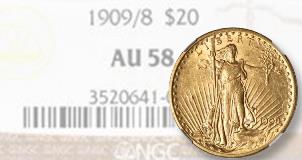 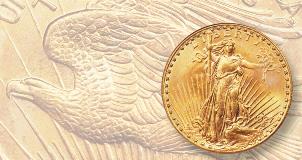 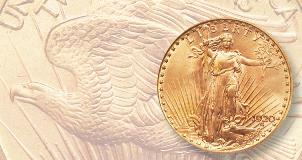