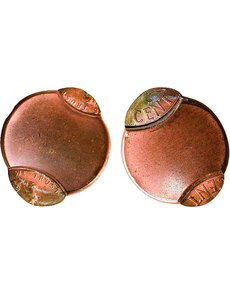 This copper-plated zinc cent planchet shows a typical saddle strike. The unstruck portion of the planchet buckled in the direction of the two hammer dies. 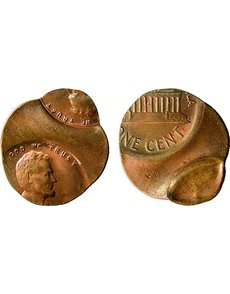 The distance between adjacent die pairs was much smaller when this saddle strike was produced. This copper-alloy cent was struck no later than 1968. 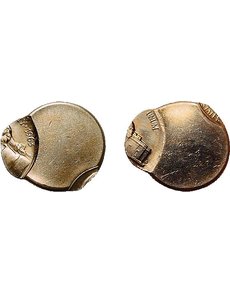 Older press models used by the U.S. Mint (Bliss, primarily) often housed two or four die pairs operating in unison. Adjacent striking chambers in these “dual” and “quad” presses were so close together that a single well-placed planchet could straddle the gap between them and receive two simultaneous off-center strikes. We call these errors “saddle strikes,” in reference to the shape of the unstruck interval between the two off-center strikes.

Rarely, the hump can buckle toward the anvil die if the collar is depressed well below the plane of the anvil die face. The hump is not always present, but fortunately it is just one of several diagnostics that can be used to identify a saddle strike, including:

Lack of a “slide zone”: Since it is trapped between two adjacent die pairs, a planchet can’t “squirt out” from between the dies. Therefore, unlike a conventional off-center strike, there is little or no development of a “slide zone” between the edge of the die-struck field and the unstruck portion of the planchet.

Consistent gap width: The minimum distance between the two off-center strikes is very consistent in any particular time period. In the illustrated copper-plated zinc cent, the minimum gap between the two die-struck fields on the reverse face is about 13.2 mm.

Lack of collar scar: For reasons that are not entirely clear to me, saddle strikes seldom show a collar scar on the face struck by the anvil die.

Orientation of adjacent dies: In any particular time period, the orientation of the adjacent dies is quite consistent. The obverse face of the illustrated copper-plated zinc cent shows the head-to-head orientation that prevailed from the late 1970s until early in the 21st century.

Saddle strikes have only been observed in cents, 5-cent coins and dimes. From this, we can conclude that dual and quad presses were never used to strike higher denominations.

Through the years, saddle strikes have mutely testified to changes in press design, die setup and die orientation.

The earliest saddle strike I’m aware of is a 1949-D Lincoln cent. The obverse face shows a unique base-to-base orientation.

Very few saddle strikes are known though the 1950s. In the 1960s, they become much more common and almost always show a head-to-head orientation. The copper-alloy cent illustrated here was probably struck in the early 1960s. It shows a relatively narrow gap between the two off-center strikes. This narrow gap is maintained until the late 1970s.

Atypical die orientations appear every so often. Shown here is a 1963-D Jefferson 5-cent coin with a head-to-base orientation that is unusual for the period. The image comes courtesy of Alfonso Chio.

A head-to-base orientation became the norm in the early and middle 1970s. The head-to-head orientation was restored toward the end of that decade.

Almost all saddle strikes were produced with the obverse die acting as the hammer die. However, a few copper-plated zinc cents are known to have been struck by inverted dies (an anvil die acting as hammer die). Two can be assigned to a particular year by virtue of a preceding normal strike. One — a 2000-D Lincoln cent — was described in the Sept. 13, 2010, Coin World. The only other dated example is a 1996 Lincoln cent. An inverted setup is assumed for that example because the hump buckled toward the reverse die and both off-center strikes show a uniface obverse.