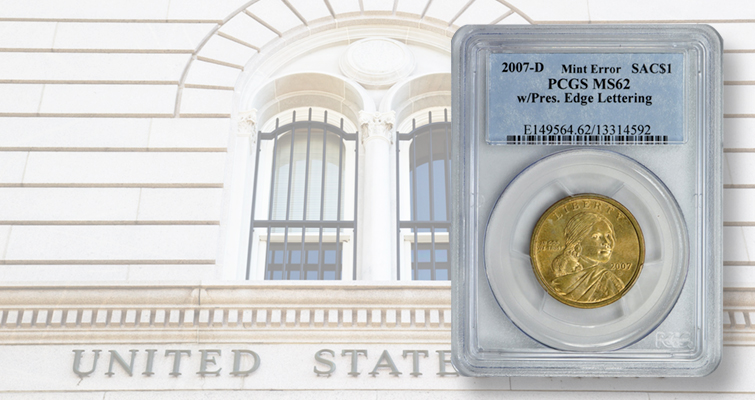 The only reported example of 2007-D Sacagawea dollar with Presidential dollar edge lettering, graded MS-62 by PCGS, sold for $17,161.10 in a July 15 auction by GreatCollections

The only confirmed example of 2007-D Sacagawea dollar with Presidential dollar edge lettering instead of the intended plain edge sold for $17,161.10 in a July 15 auction by GreatCollections.

The coin’s discovery in pocket change in 2007 earned Colorado collector Andrew Moores a $10,000 finder’s fee from PCGS for allowing the firm the privilege of authenticating, grading and encapsulating the error.

The 2007-D Sacagawea dollar should have a plain edge, but instead it bears the Presidential dollar inscription of date, Mint mark, and mottoes E PLURIBUS UNUM and IN GOD WE TRUST. All edge elements appear incuse.

Moores received his $10,000 reward and was able to keep the discovery piece.

GreatCollections officials would not disclose if Moores had consigned his find to the July 15 auction or if he had parted with it in a private transaction sometime after its certification by PCGS.

GreatCollections President Ian Russell said the coin was sold to a private and advanced collector who found out about the coin by reading the article about the auction published in the July 9 issue of Coin World.

The 2007-D Sacagawea dollar with Presidential dollar edge lettering was discovered by Moores in early November 2007. Moores indicated he likely carried the coin in his pocket for two weeks before a friend alerted him to the PCGS U.S. Coins Message Boards where collectors were discussing PCGS’s reward.

Coins of differing designs can become comingled in several ways. For example, a Denver Mint employee could have found the coin lying on the press-room floor, picked it up and tossed it in with the look-alike Presidential dollars awaiting transport to the edge inscription station.

During the 2007 inaugural year for Presidential dollars, imparting the incuse edge details was a separate operation physically removed from the main production floor and the coinage presses on which the coins were struck.

The timing of the strikes suggests that the error Sacagawea dollar was edge lettered and released into circulation along with the John Adams dollars.

No more circulation-quality 2007 Sacagawea dollars were produced after February at any Mint facility.

Beginning with Presidential dollar production in 2008, the application of the edge lettering was integrated as the final step in the production process. 2008 dollars also had the edge devices modified, with IN GOD WE TRUST removed and moved to the obverse in response to thousands of 2007-P George Washington Presidential dollars entering circulation without having gone through the edge-lettering operation.

Sacagawea dollars were struck in circulation quality from 2000 to 2008 inclusive, but only 2000 and 2001 coins were placed into circulation through the Federal Reserve. Circulation-quality Sacagawea dollars dated 2002 through 2008 were sold at numismatic premiums in bags and rolls, with none earmarked for general circulation. 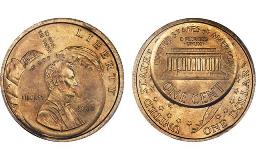