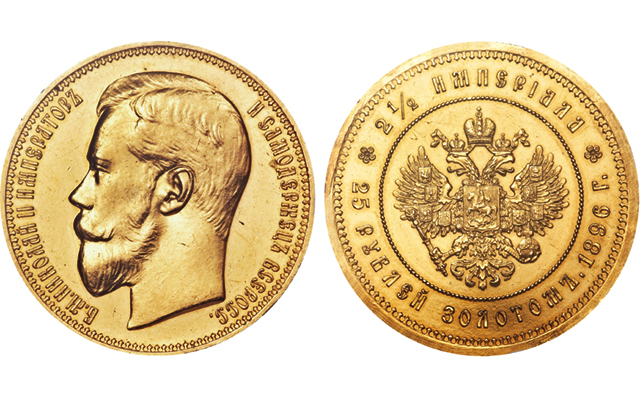 The top lot in Heritage Auctions’ April 10 to 12 auction during the Chicago International Coin Fair was the 1896 gold 25-ruble piece of Nicholas II. Graded Mint State 61 by Numismatic Guaranty Corp., it realized $217,375.

One of the classic gold rarities of 19th century Russian numismatics, an 1896 Nicholas II 25-ruble coin sold for $217,375 in Heritage Auctions’ $15 million world and ancient coin auctions held April 10 to 12 at the Chicago International Coin Fair.

The price realized broke the previous record for the type by nearly $30,000, according to the auction house.

The coin is also called 2½ Imperials. It shows Nicholas II on the obverse, and is thought to be a special commemorative issue for his coronation. The reverse shows the crowned double-headed Imperial eagle.

The presentation piece, graded Mint State 61 by Numismatic Guaranty Corp., is from a mintage of 300 pieces and “very few” have survived, according to Heritage.

The 1895 gold 25-ruble piece is tied with two other coins as the largest Russian coins of the era in terms of gold weight, each containing 32.26 grams of pure gold.

For more information about the auction, visit www.ha.com or telephone the auction house at 800-872-6467.