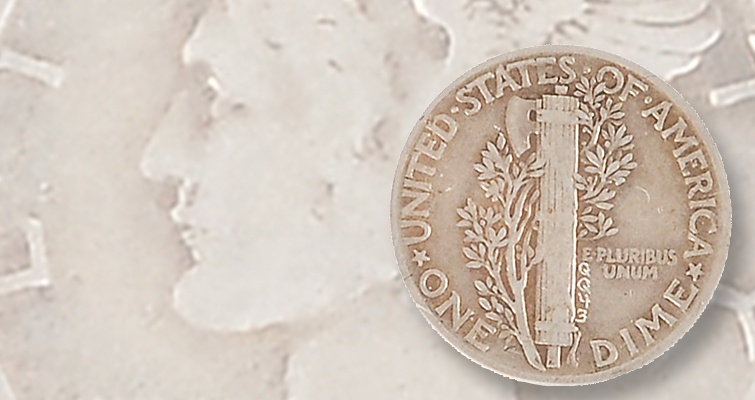 RR Auction's Oct. 13 to 20 online sale offers space-flown artifacts, including this 1944 Winged Liberty dime carried aboard the Liberty Bell 7 Mercury spacecraft in 1961. The dime is marked QQ43 to the right of the fasces. 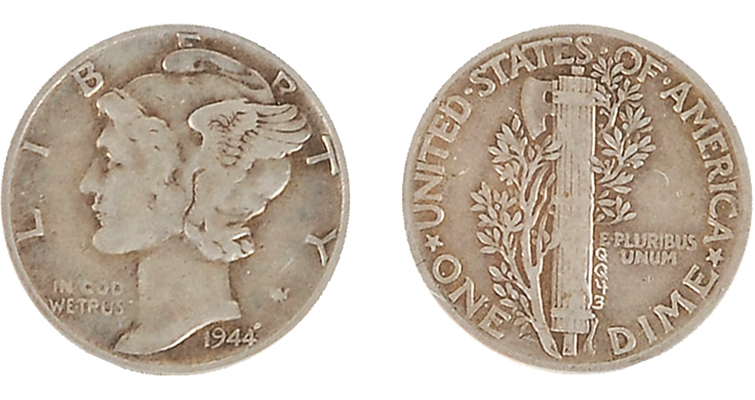 The 1944 Winged Liberty Head dime is one of 52 dimes recovered in 1999 from Astronaut Gus Grissom's spacecraft that sunk to the bottom of the Atlantic Ocean upon its return to Earth on July 21, 1961, following a successful suborbital flight. 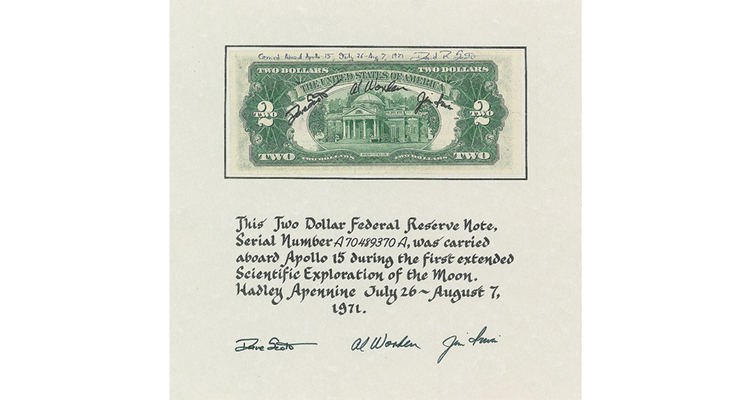 The crew of the Apollo 15 spacecraft Endeavor signed this Series 1953-B Red Seal $2 note that was carried into space. Commander David Scott signed the back of the note twice. 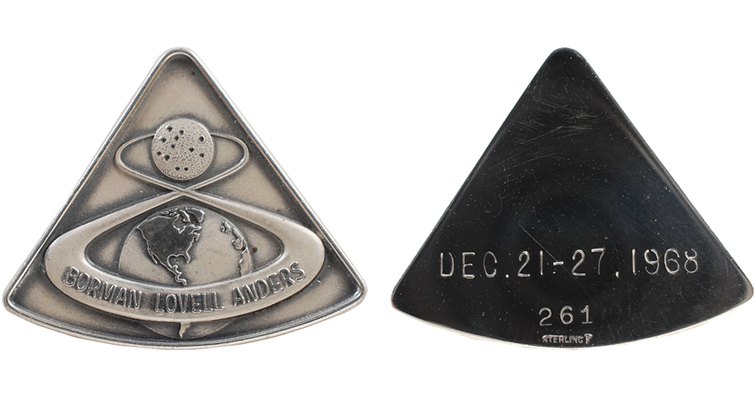 A pre-sale estimate of $5,000+ has been placed on this space-flown Apollo 8 sterling silver Robbins medal.

Coins, paper money and medals that have flown aboard American spacecraft are among the lots to be offered in an online sale Oct. 13 to 20 by RR Auction.

Of the lots offered, 517 are dedicated to space collectibles. A 22.5 percent buyer’s fee will be added to the final total hammer price of each lot won.

Among the lots to be offered are a 1944 Winged Liberty Head dime salvaged in 1999 from Astronaut Virgil Ivan “Gus” Grissom’s 1961 Liberty Bell 7 spacecraft; a Series 1953B $2 United States note signed by the crew of Apollo 15; and  a space-flown Apollo 8 Robbins medal from Astronaut Charlie Duke’s personal collection.

The 1944 Winged Liberty Head dime was one of 52 dimes recovered July 20, 1999, from Grissom’s Liberty Bell 7 Mercury spacecraft. Manufactured by McDonnell Aircraft Corp. for the July 21, 1961, space mission, the space capsule traveled to the edge of space, an altitude of 188 miles, during a successful suborbital flight before returning to Earth and sinking 16,000 feet to the bottom of the Atlantic Ocean, the first manned spacecraft to be lost at sea. Grissom nearly drowned.

The dime to be offered in the sale is marked QQ43 in a vertical line on the reverse, to the right of the fasces, just below the E in E PLURIBUS UNUM.

Accompanied by a certificate of authenticity signed by Curt Newport, the underwater salvage expert who spearheaded the 1999 spacecraft recovery expedition, the dime has an estimate of $5,000+.

Grissom was killed on Jan. 27, 1967, along with fellow astronauts Ed White and Roger Chaffee during a pre-launch test for the Apollo 1 mission at Cape Canaveral Air Force Station (then known as Cape Kennedy), in Florida.

The three-man crew of Apollo 15 — David R. Scott, Commander; Alfred M. Worden, Command Module Pilot; and James B. Irwin, Lunar Module Pilot — signed the back of a Series 1953B $2 United States note carried aboard the Endeavor spacecraft. An additional certification on the note’s back is also signed by Scott.

Apollo 15 was the first extended scientific exploration of the moon, conducted from July 26 to Aug. 7, 1971.

According to the auction lot description: “Carried as a good luck symbol on many space flights, a total of fifty two-dollar bills were flown to lunar orbit on this mission. Another package of currency was taken to the lunar surface, but accidentally left behind.”

From Astronaut Charles Duke Jr. personal collection is a triangular-shaped, sterling silver Robbins medal taken aboard the Apollo 8 spacecraft for the mission Dec. 21 to 27, 1968.

The Apollo 8 medal’s obverse bears a raised rendition of the mission’s insignia, showing the Earth and moon separately within the loops of an orbital 8. The reverse is stamped with the dates of the mission, the serial number, 261, and STERLING for the silver content.

According to Spaceflownartifacts.com, “The famous Robbins medallions have been produced for, and flown on, every manned U.S. mission since Apollo 7. Minted by the Robbins Company, of Attleboro, Mass., the sterling silver medallions for each mission were paid for by the crews and available for purchase only by NASA astronauts at the time.” 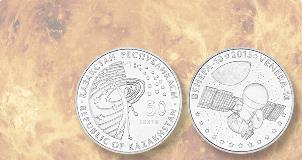 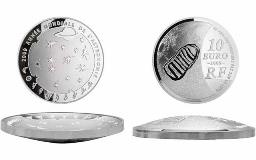 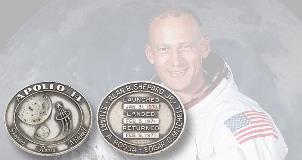