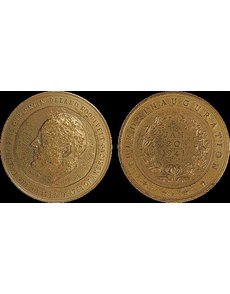 When President Franklin D. Roosevelt won his third term, the official inaugural medal, above, quickly sold out, so organizers issued a second version with a “2” placed at the ends of the wreath. The first medal is rarer than the second.

During a 2012 Christmas visit, my mother presented me with a handful of older U.S. coins. All were familiar to me, except one: a large bronze medal celebrating the Jan. 20, 1941, inaugural of President Franklin D. Roosevelt.

The obverse shows a profile portrait of FDR, and the reverse notes the date of his third inaugural. I would welcome any additional information you can provide about this item.

As another presidential inaugural approaches, it is fitting that a question about a past inaugural medal should arise.

Franklin Delano Roosevelt was elected to an unprecedented four terms, his tenure eventually leading to passage of the 22nd amendment to the U.S. Constitution, codifying the informal limit, established by precedent, to two terms of service.

By the time of FDR’s presidency, it had become customary for the inaugural committee to commission official inaugural medals to celebrate the occasion. These medals should not be confused with the medals struck and issued by the United States Mint to mark the presidency.

The 1941 medals, unusually, were struck at the U.S. Mint with the agency’s design input, thanks to Roosevelt’s friend Nellie Tayloe Ross, director of the U.S. Mint, who was appointed chairman of the medals committee.

Following lackluster sales for the 1933 and 1937 inaugural medals, Roosevelt directed the committee to make the 1941 medals more affordable, according to The President’s Medal 1789-1977 by Neil MacNeil.

At a price of $1, the medal sold out its mintage of 1,000 the first day of sale, and the committee authorized another 1,000 to be made. A small 2 placed at the open end of the wreath on the reverse distinguishes the second batch. Those too sold out and another 1,000 were authorized, also with the 2 added.

The reader’s example is the scarcer type 1 medal. From the beginning, collectors have paid a premium for the earlier version (an example in nearly similar condition sold in a 2012 auction for $525).

FDR was presented with the unique gold medal, and Davidson and Ross each were authorized to buy one of the two silver medals made.