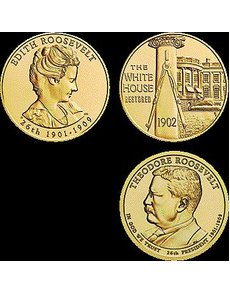 The coin and medal are enclosed in a plastic card that is enhanced with representations of the portraits of the two Roosevelts, with background information on the back.

The set is priced at $9.95 each. A shipping and handling fee of $4.95 will be added to all domestic orders.

The Edith Roosevelt reverse — recognizing her contributions to the restoration of the White House in 1902 — was designed by U.S. Mint AIP Master Designer Chris Costello and sculptured by U.S. Mint Sculptor-Engraver Donald Everhart II.