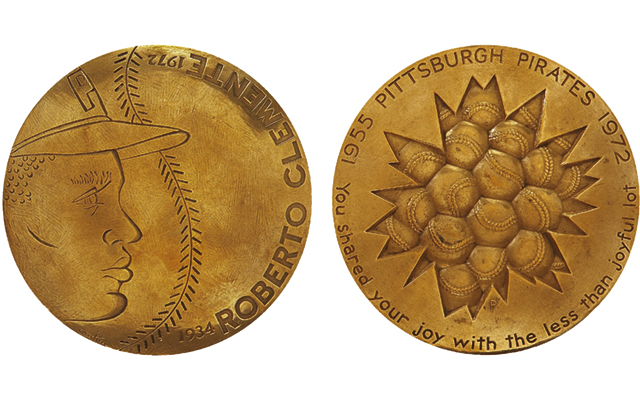 Roberto Clemente appears on this innovative medal authorized by Congress and struck by the U.S. Mint. Examples can be found in the marketplace for well less than $100.

Some medals celebrate baseball players who tore down cultural barriers — racial, ethnic and religious. Among these pioneers is a man who lost his life during a humanitarian mission.

Roberto Clemente Walker (as with many of Latino heritage, his mother’s maiden name, Walker, is paired with his father’s last name) was one of the greatest players in the sport from the mid-1950s until his tragic death in 1972. He was born in Barrio San Antón, Carolina, Puerto Rico, in 1934, where as a high school ballplayer in the late 1940s he caught the attention of an official with a local softball team. By the age of 16, he was playing on an amateur Puerto Rican baseball team. He turned professional in 1952, playing for two years on a Puerto Rican winter league team.

In 1954, Clemente was signed to play on a minor league team in Montreal affiliated with the Brooklyn Dodgers. During the 1954 rookie draft, however, he was signed by the Pittsburgh Pirates, the team he played for until his death. Clemente’s performance on the Pirates proved to be outstanding, and he received multiple awards over the course of his career.

In December 1972, Clemente — also lauded as a humanitarian — sponsored relief missions to Managua, Nicaragua, after it was devastated by a magnitude of 6.2 earthquake. After the supplies onboard the first three flights were stolen by corrupt officials, Clemente personally led a fourth mission on Dec. 31, 1972. However, the plane crashed into the ocean, killing all on the aircraft. Clemente’s body was never found.

In early 1973, a bill was introduced in the U.S. House of Representatives to authorize a congressional gold medal honoring Clemente; one of the co-sponsors was a former baseball player who had played against Clemente, and who became a member of Congress. The bill quickly passed, and was signed into law May 14, 1973, by President Nixon.

The design by Virgil Cantini took an innovative approach. Both sides are convex (presaging the 2014 National Baseball Hall of Fame commemorative coins), with the obverse design elements appearing as an outline of a portrait of the player along with the stitched seam of a baseball. The reverse depicts a grouping of baseballs bursting from the surface as though they about to rise into the air. The U.S. Mint struck the sole gold medal and bronze duplicate medals. The Chamber of Commerce of Greater Pittsburgh presented the gold version to Clemente’s widow, Vera. The chamber sold to the public the 3-inch bronze and 1.3125-inch bronze versions, some of the medals with gold plating.