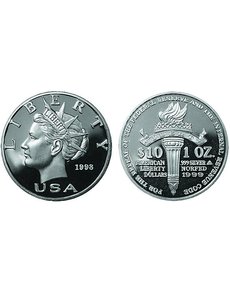 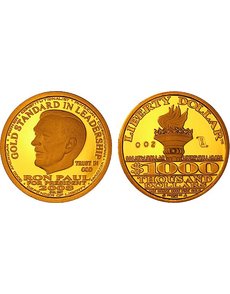 The 2008 1-ounce gold $1,000 Ron Paul Liberty Dollar is a highly sought after piece among the Liberty Dollars. An example sold on eBay on April 11, 2011, for $3,500, nearly two and a half times the spot price of the gold it contains.Images courtesy of Bernard von NotHaus. 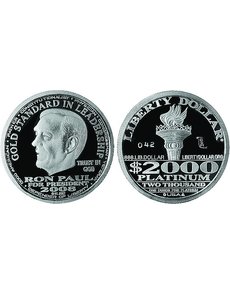 Rising precious metals prices and government confiscations are fueling collector and investor interest in the Liberty Dollar medallions, and driving prices for the pieces to new heights.

Prices for the Liberty Dollars, especially of the gold, silver and platinum pieces, began to rise swiftly early in 2007 with the increase in the spot price of the precious metals.

Collectibility further pushed prices higher soon after the November 2007 seizure by the FBI and Secret Service of tons of Liberty Dollars. Prices have continued on the rise since the March 2011 prosecution and conviction of the creator of the Liberty Dollar, Bernard von NotHaus.

Some Liberty Dollar pieces were still being produced and issued dated 2008 and 2009 following the raid until an undisclosed time before von NotHaus shuttered all Liberty Dollar operations on July 31, 2009.

Among the Liberty Dollars in greatest demand are pieces bearing the obverse portrait of Rep. Ron Paul R-Texas, who sought the Republican nomination for the presidency in 2008 and is a longtime advocate of alternative currencies such as the Liberty Dollars.

The 1-ounce gold Liberty Dollar from the same series bearing serial No. 159 sold for $3,500 in another eBay auction that closed April 11.

Both pieces were offered by different sellers.

Collector interest even in the copper Ron Paul Liberty Dollar is high, primarily because of Paul’s popularity, not necessarily production rarity, according to Michigan collector Ron Goodger, a buyer, seller and collector of Liberty Dollars.

More of the copper pieces were shipped to customers than previously thought before federal authorities seized the remaining pieces along with other property in 2007, according to Goodger.

Goodger believes 20,000 examples from the 60,000-piece order of Ron Paul copper Liberty Dollars were shipped before the FBI raid.

Even paper certificates, called “warehouse receipts,” that were backed by gold and silver held at a private depository, are collectible in their own right.

A wide array of Liberty Dollars

Since first hitting the market in 1998, Liberty Dollars have been produced in a multitude of versions in gold, silver, platinum and copper.

Goodger maintains a historical website tracing the history of the Liberty Dollar, referencing record prices at auction and private sales when known, and illustrating most of the versions and warehouse receipts. The website can be found at http://sites.google.com/site/libertydollarencyclopedia/.

Among the information Goodger maintains on his Liberty Dollar website are price records, though dates transactions were completed are not always available.

“Although most of the record prices were set during the two ‘NORFED craze’ periods due to publicity from the raid and the conviction, there are some that were set in between, strictly because of a growing collector base and rarity of certain pieces,” he said April 14.

Goodger illustrates on the Liberty Dollar Encyclopedia site images of some silver $20 Liberty Dollars dated 2009 that were struck, but never released, both before and shortly after von NotHaus closed Liberty Dollar operations.

At any given time, eBay has 500 or more listings of various Liberty Dollars for sale. Many are bringing prices well above their original issue price and the intrinsic value of the precious metal they contain.

Most of the pieces offered are various silver versions, with some pieces, depending on design and desirability, bringing hundreds of dollars each. ¦