Rising from the flames 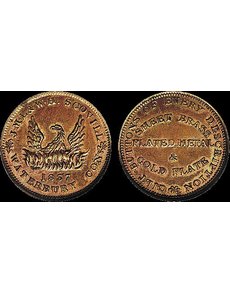 J.M.L. & W. H. Scovill in Waterbury, Conn., was a prolific manufacturer of tokens during the Hard Times era along with merchant tokens. The token illustrated above is one of the firm’s store cards.

Among exonumists, the name Scovill looms large. With roots firmly planted in the presidency of Thomas Jefferson, Scovill has produced thousands of different tokens, coins and medals in the past two centuries. As the preeminent manufacturer of tokens and store cards in 19th century America, the history of financial crisis, political campaigning and business advertising is writ in large measure in the metallic output of this Waterbury, Conn., firm.

Lamson’s younger brother, William Henry Scovill, purchased half interest in the firm in April 1827, establishing the firm of J.M.L. and W.H. Scovill. Lamson headed up marketing and finance. W.H. took over manufacturing. Almost immediately the company accepted its first store card order in 1828. Shortly thereafter Scovill issued a store card for its own business.

It depicts a phoenix rising from flames, the names of its founders and date on its obverse. The reverse reads GILT BUTTONS OF EVERY DESCRIPTION / SHEET BRASS / PLATED METAL / & / GOLD PLATE.

The phoenix rising from flames image was emblematic of the firm’s rapid recovery after its disastrous fire of 1830.

Scovill likewise struck merchant store cards for a diverse cross section of issuers. Examination of the Low-listed pieces indicates that probably one-fourth of the types were produced by Scovill, and since many of these are among the most common varieties, the total produced must have been enormous. Evidence shows that production of the NOT ONE CENT tokens, alone, had exceeded 3 million pieces.

Fred L. Reed III has been a collector and writer for many years. Reach him at www.fredwritesright.com.