Rios speaks to collectors during forum at ANA convention 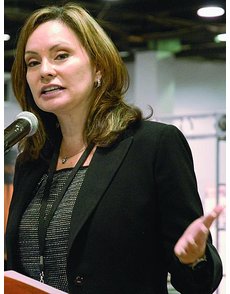 United States Treasurer Rosa Gumataotao Rios speaks to collectors during an Aug. 16 forum at the ANA World’s Fair of Money in Rosemont, Ill.

United States Treasurer Rosa Gumataotao Rios said Aug. 16 that she is unaware of any looming appointment to the position of director of the United States Mint.

Rios addressed a number of topics during a collectors forum during the American Numismatic Association’s World’s Fair of Money in Rosemont, Ill.

The position of Mint director has been empty since January, when Edmund C. Moy, appointed to the post by President George W. Bush. President Barack Obama has not made an appointment to the position.

On another issue, Rios said it is not likely that the new Series 2009 $100 Federal Reserve notes will be released anytime during calendar year 2011. Rios said the Treasury Department and Federal Reserve are coordinating efforts to resolve issues that have delayed the $100 note’s release since the release of the notes was originally scheduled for February 2011.

Rios said soon after the newly redesigned Series 2009 notes were unveiled to the public in April 2010, notes printed during preliminary production were exhibiting creasing, and production was suspended. Since then, extensive testing during the printing of additional notes has been conducted to solve the creasing problem, but so far, a fix has not yet been determined.

Rios said regular production of the notes is expected to be resumed shortly, and sufficient notes would have to be produced before the notes could be introduced. Rios said it is up to the Federal Reserve to determine when the $100 notes will officially be released into general circulation.

The Federal Reserve recently placed a record order for currency with the Bureau of Engraving and Printing, said Rios, who has oversight over the BEP as well as the U.S. Mint. She said the order represents the highest order level in five years. Rios said more than two-thirds of currency production is for foreign distribution.

During the collectors forum, Rios also answered questions on a variety of subjects.

Rios said cash is king, and there’s no immediate move to replace paper currency or coins with other forms of money.

Rios said it is also up to Congress whether to withdraw the $1 Federal Reserve note from circulation. Other nations with dollar coin equivalents withdrew the paper money equivalents after the coins were introduced into circulation. Rios said the American public should have the option as to which form of the $1 denomination they choose to use. She said she prefers using cash — both coins and notes — instead of debit cards.

Peterson could serve officially as acting Mint director for only a maximum of 210 days, which expired in early August.

Rios assured those attending the collectors forum that the nation’s gold reserves are safe and sound, with most held at the Fort Knox Gold Bullion Depository in Kentucky. Roughly 5 percent is stored at the Federal Reserve Bank of New York and a small portion is housed at the Denver Mint. She said the gold reserves are audited annually. She said she has seen the physical metal at the three locations and said, “it is real.”

Rios said that as a child, she collected pre-1959 Lincoln cents. She said she’s encouraged her children with the collecting of the 50 State quarter dollars, and America the Beautiful quarter dollars.

Rios said she initially had no interest in becoming part of the Obama presidential administration, although she had been part of President Obama’s transition team. After that position, she returned to her investment management job in San Francisco, but she said she was contacted once again about an administration position. She said she then specifically requested the treasurer’s post because of its rich history and tradition. As treasurer, she said, in addition to Mint and BEP oversight, she is also senior adviser to Treasury Secretary Timothy F. Geithner on community development. ¦