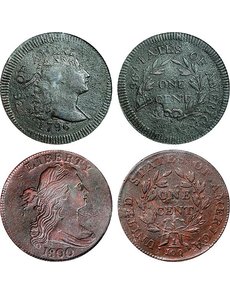 Omaha, Neb., coin dealer Tom Reynolds is seeking the return from Stack's Bowers Galleries of 59 U.S. half cents and large cents the firm offered at auction earlier this year and that Reynolds claims were among the $1.8 million in coins stolen from him in a robbery by two men 12 years ago.

Reynolds said July 26 that Stack’s Bowers officials were initially cooperative with him, but then for reasons unknown to him, the auction firm subsequently severed all communications. Reynolds is now seeking the return of the coins by using private legal assistance and the aid of Omaha law enforcement officials.

Reynolds also filed a complaint July 25 with the Professional Numismatists Guild against Stack’s Bowers, since several of its principals are PNG members.

Reynolds said he was working with Stack’s Bowers Galleries officials to get the coins returned soon after he determined that 11 coins sold March 29 in the firm’s auction in Baltimore and 48 more offered in an April 5 online auction were among the coins taken in an April 25, 1999, theft, when several items were removed from his car while it was parked in the driveway of his residence.

Reynolds was unloading his car after returning from the 1999 Central States Numismatic Society Convention in Milwaukee and was inside his house when the theft occurred. Within 24 hours of the theft, some of the coins stolen surfaced in New York and others were found in Miami. Other stolen pieces remained missing, however.

In the ensuing two weeks and within days of one another, two men — Alexander Volis, from the Brighton Beach section of Brooklyn and Michael Kapelushnik from Miami — were arrested in their respective cities. Both were charged, convicted and eventually imprisoned for the theft. Volis and Kapelushnik served prison sentences of 27 months and 24 months, respectively, and are no longer incarcerated.

It was shown during the case that the two men had followed Reynolds from Milwaukee to his residence in Omaha, stopping along the way when he did, and executed the theft once Reynolds went inside his home.

Of the $1.8 million in early U.S. copper coins stolen, pieces valued at $1.25 million were recovered subsequent to the arrest of Volis and Kapelushnik. None of the remaining $550,000 in stolen inventory had surfaced in 12 years until the coins Reynolds identified as his appeared in the Stack’s Bowers consignments for the March 29 and April 5 auctions.

The 59 coins in question were consigned to Stack’s Bowers by a Russian dealer from Moscow, according to Omaha Police Detective William G. Fell, who has handled the theft investigation since April 25, 1999. Reynolds placed the value of the 59 coins at between $30,000 and $35,000.

The 48 online lots were shipped from California to the CSNS show in April in Rosemont, Ill., where Reynolds said he was able to examine the coins and identify them with his detailed descriptions and photographs.

Reynolds said he was told by Brian Kendrella, Stack’s Bowers operations manager, whom Napolitano assigned to the situation, that if the Omaha Police Department secured and had served a subpoena, the coins would be shipped to Omaha for police there to determine ownership.

With the aid of the Douglas County Attorney’s Office in Omaha, Detective Fell secured a court subpoena on May 31 and sent it to Kendrella.

Reynolds said his last contact with Stack’s Bowers officials was when he talked with Napolitano and Kendrella in June in Baltimore during the Whitman Coin Expo there. Reynolds said he was informed then that the Russian dealer who consigned the coins in question has not replied to Stack’s Bowers inquiries.

Omaha law enforcement authorities or Reynolds have taken no additional action to seek a new subpoena.

Coin World placed several phone calls to and left messages for Frye, the Stack’s Bowers attorney, but the calls were not returned as of press time.

PNG Executive Director Robert Brueggeman told Coin World July 26 he was in receipt of a July 25 email from Reynolds outlining his request to file a complaint. Brueggeman said he had just begun the initial steps to process the complaint.

PNG’s legal counsel, Armen Vartian, said he could not comment on Reynolds’ complaint as he had a conflict of interest because he had discussed details of the situation with someone associated with the case before the PNG complaint was filed. ¦