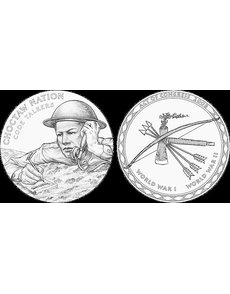 The CCAC and CFA agreed on their recommendations for the obverse of the Choctaw Nation code talkers medal. Also shown is the CCAC’s endorsed reverse. 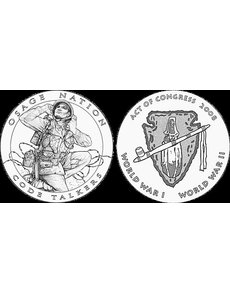 CCAC members endorsed these designs for the Osage Nation code talkers medal, although they were less than enthusiastic about the two designs. 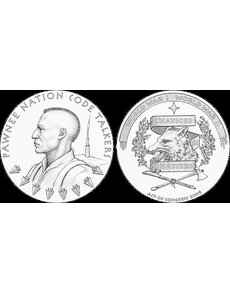 The Citizens Coinage Advisory Committee recommended these designs for the congressional gold medal honoring Pawnee Nation code talkers who fought in World Wars I and II. 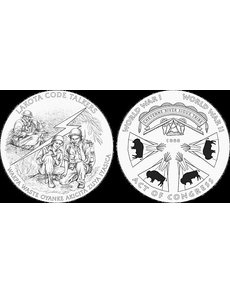 Panel members sided with the Cheyenne River Sioux by endorsing the tribe’s preferences for their code talker medal.

The Citizens Coinage Advisory Committee during its June 26 meeting in Washington, D.C., largely followed tribal requests for designs on four gold congressional medals to be issued next year for four Native American tribes that supplied code talkers during combat operations in World Wars I and II.

The code talkers, working in pairs, would communicate combat maneuvers by radio in their native tongues, with the assumption that enemy forces could not understand what the code talkers were saying.

In one departure from tribal requests, the CCAC did not endorse a Pawnee Nation request that its code talker medal have an obverse showing a kneeling code talker holding a radio receiver in one hand and a helmet in the other hand.

The Commission of Fine Arts had endorsed that design, but the CCAC instead backed a design showing a profile of a Native American soldier with a radio antenna backpack. Eight arrows, one for each war the tribe has fought as part of American forces, line the rim of the medal design endorsed by the CCAC. That design, highly praised by committee members, drew 24 of a possible 30 points.

A updated tribal seal, showing a snarling wolf, was endorsed with 26 points for the reverse of the Pawnee Nation medal. The CFA rejected that design saying a less realistic design was needed to offset the image it recommended for the obverse.

The Osage Nation’s request to use the same basic design for the obverse as the Santee Sioux tribe had selected for its medal won another less than enthusiastic endorsement from the CCAC. It drew 22 points, but several members said they wished the Mint had insisted on fresh art for the Osage medal. (Congress has ordered medals presented to multiple tribes; the Mint presented designs for medals for four other tribes to the CCAC in April and the CFA in May for review.)

Only one design, also a tribal seal, was submitted for the Osage reverse. It won a begrudging endorsement from the committee members who urged Mint artists to touch up the tribal seal on which it is based.

The CCAC accepted a tribal recommendation for the design of the Cheyenne River Sioux medal showing three code talkers, one from World War I and two from World War II. The CFA also supported this design. CCAC members gave the design 27 points.

The panel also backed a reverse design sought by the tribe with their tribal seal showing four tepees. The panel recommended removing the date “1868” from the reverse at the request of a tribal representative. The design won 29 of 30 possible points.

For Oklahoma’s Choctaw Nation, the panel backed a design showing a tribal radio operator recording a message in his native language. This design, also backed by the CFA, had 28 of 30 points from the CCAC. A reverse showing the Choctaw Tribal seal won the endorsement with 29 points.

Treasury Secretary Timothy F. Geithner has the final say on what designs are selected for both the coins and medals.

The recommendations of the two review panels, as well as the Army foundation and the tribal groups will be forwarded to him. ¦