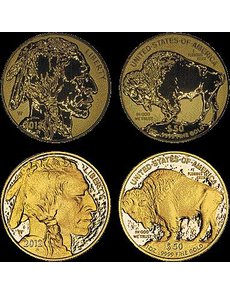 Images of the first struck Reverse Proof 2013-W American Buffalo gold $50 coin, above and left, were taken through a microscope and, because of lighting conditions at the West Point Mint, do not depict the coin’s true color. The Reverse Proof coin’s color is similar to that of the Proof 2012-W American Buffalo gold coin, shown above and to right. Notice the differences in the finishes. 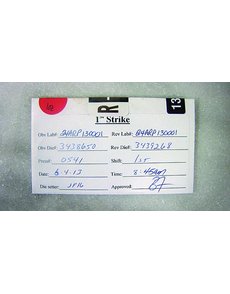 The envelope in which the first strike Reverse Proof 2013-W American Buffalo coin is kept identifies the coinage dies and press used, along with the date and time the coin was produced at the West Point Mint. 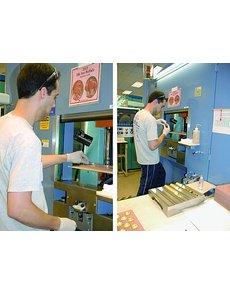 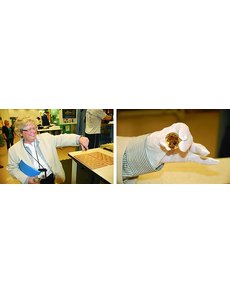 West Point Mint Plant Manager Ellen McCullom proudly displays one of the Reverse Proof American Buffalo strikes. The coins will be offered by sale by the United States Mint at a future date.

At 8:45 a.m. Eastern Daylight Time June 4, the first Reverse Proof 2013-W American Buffalo $50 gold coin was struck at the West Point Mint, inaugurating full-scale production for an issue to be offered by the U.S. Mint later this year.

After the 1-ounce .9999 fine gold coin was struck, it was placed inside a special envelope on which was recorded the date, time and shift of production, serial numbers of the obverse and reverse dies used, and identification of the specific Gräbener coinage press on which the coin was struck.

The enveloped coin was then secured inside a vault to preserve the historical record for the issue.

The obverse and reverse dies on the Gräbener GMP 360 coinage press used to produce the Reverse Proof coins are oriented to strike with a vertical motion. The upper or hammer die bears the American Buffalo coin’s obverse image, while the lower or anvil die carries the reverse design.

A press operator feeds the planchets between the coinage dies one at a time by hand, using dedicated tongs.

Each coin is struck three times between the dies, with each strike of the dies exerting 120 tons of pressure, to ensure the planchet’s metal completely fills the design elements in the obverse and reverse dies. The outward expansion of the coin is restrained by a reeded edge collar die, which imparts the reeded edge.

After the three designated strikes, the collar retracts and the struck coin rests on top of the anvil die until it can be safely removed with tongs.

Each struck coin is individually inspected, with or without magnification as the press operator deems necessary. The operator looks for defects that would result in the coin being rejected, such as scratches or other similar damage.

Struck coins may also be rejected at subsequent inspection and quality control stations.

Approved examples move on to the encapsulation station, where the coins are placed into plastic capsules and then inserted into the final packaging.

Stern-Leach, of Attleboro, Mass., currently fabricates the blanks used for American Eagle and American Buffalo coins from gold the U.S. Mint secures on the open market from a number of gold suppliers, including Metalor, Johnson Matthey, Ohio Precious Metals and the Royal Canadian Mint.

Since production of the Reverse Proof coins only began June 4, Mint officials have no production statistics yet on die life or rejection rates.