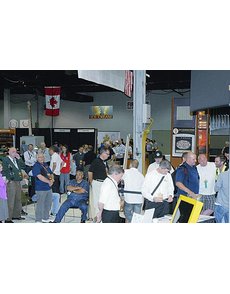 The market highlight of the ANA World’s Fair of Money was the U.S. Mint’s sale of $3.33 million worth of Reverse Proof 2013-W American Buffalo gold $50 coins, with buyers willing to stand in line for hours in front of the Mint booth.

Besides auctions by Heritage and Stack’s Bowers Galleries that collectively brought more than $75 million, the market highlight of the American Numismatic Association World’s Fair of Money was the U.S. Mint’s sale of $3.33 million worth of Reverse Proof 2013-W American Buffalo 1-ounce gold $50 coins.

These are coins that “come nice” and obviously the Mint is taking great care in their production. On Aug. 26, the Professional Coin Grading Service website recorded 79 coins graded Proof 69 and 215 pieces graded perfect Proof 70. Despite the relative availability of Proof 70 coins, the ANA-released coins certified by PCGS and Numismatic Guaranty Corp. are selling for huge premiums on the secondary market.

In contrast, a Proof 70 example with only a “Black Diamond First Strike” label brought $2,199 in an Aug. 24 eBay auction, while ungraded, in-hand, unopened and sealed examples are selling at the $1,800 level on eBay.

Perhaps most surprising is that these premiums are being paid while the issue is still available for purchase directly from the U.S. Mint, and will be until Sept. 5.

When the coins first went on sale Aug. 8, 12,630 were sold for $1,640 each; the price as of Aug. 29 was $1,740 per coin. This means that those who were quick to order their coins already have a quick paper profit, as the Mint has repriced the coins to reflect increasing gold prices.

While those purchasing sets at the ANA faced ordering restrictions, purchases made from the Mint website have no household ordering limit. The Mint has not announced whether the Reverse Proof finish will be used in future years. Regardless, the issue has added a healthy dose of excitement to the rare coin market as summer draws to a close. ¦