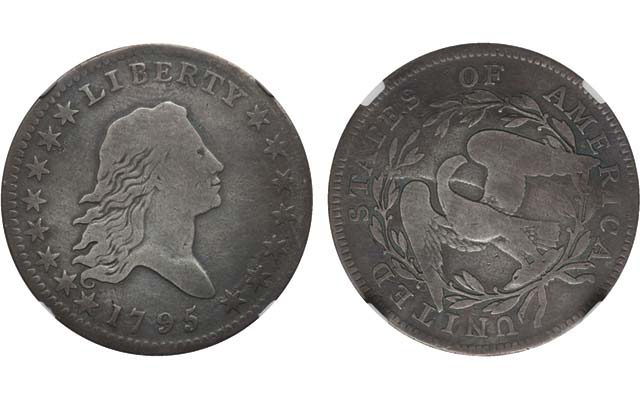 A scarce O-106 1795 Flowing Hair half dollar, with a noteworthy reverse die crack, had been holed at one time, but was subsequently repaired. It sold for a reasonable $763.75 on April 23.

Just three of the 52 1795 Flowing Hair half dollars sold for less than $800 at the 2015 Heritage CSNS sale. Each of these had somewhat severe problems. An example from the Hilt Collection, of the O-106 variety, that was once holed and had been repaired was graded NGC Very Good Details, Plugged and sold for a reasonable $763.75.

The variety is very scarce, and Heritage notes: “Many advanced collections are missing this die marriage, although it can be found for a price.” This variety is characterized by a massive reverse die break that splits the reverse across the eagle’s right wing and neck. The repair was done skillfully and the resulting surfaces have retoned nicely, making this a suitable choice for the budget-minded collector looking for a filler example of this very tough Overton variety.