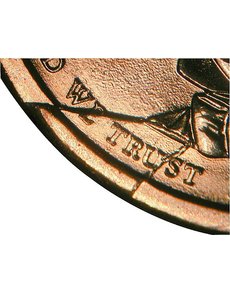 Close-up image depicts the obverse face of a 2010 Millard Fillmore dollar with a retained cud at 7:00. 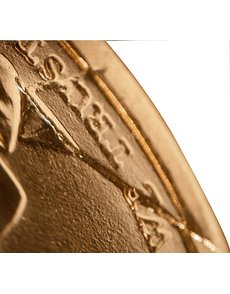 Low-angle view of the retained cud of the 2010 Millard Fillmore dollar shows the characteristic step. 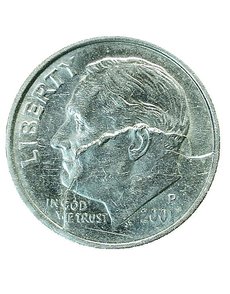 This 2001-P Roosevelt dime was struck by a shattered obverse (anvil?) die. A 50 percent retained cud is crossed by several additional die cracks. 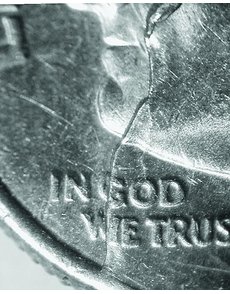 Close-up image of the 2001-P Roosevelt dime depicts the horizontal offset seen around in god we trust. 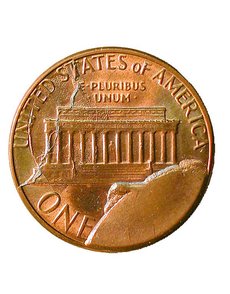 The reverse face of a 1985 Lincoln cent has a large cud in the southeast quadrant and an arcing, rim-to-rim die crack in the northwest quadrant. 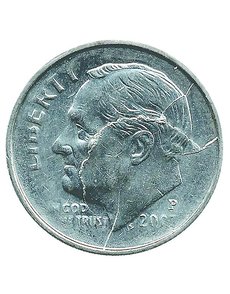 Dies are subject to brittle fracture, and this occasionally leads to a piece of a die face breaking off. The general term for such errors is “die break.”

The corner of the die (where die face meets die neck) is particularly vulnerable to breakage. A die break that carries off the rim gutter and at least a little bit of the adjacent field is called a “cud.” Coin metal flows into the resulting void, leaving a lump on the coin’s surface that is also called a cud.

Despite the frequency with which retained cuds occur, misidentification is frequent both in and out of “slabs” (grading service capsules).

In order to diagnose a retained cud, there must be clear evidence of movement. The two key diagnostics to look for are vertical displacement and horizontal offset.

The illustrated 2010 Millard Fillmore dollar shows a retained cud in which the letters e tru (of we trust) sit on a low plateau. Vertical displacement is evident all around the break. It is one of two examples struck by the same broken die sent to me by Fred Weinberg. Remarkably, each example also lacks an edge inscription — a completely unrelated error since the edge device is applied after the coin is struck.

More severe vertical displacement is seen on a retained cud that bisects the obverse face of a 2001-P Roosevelt dime illustrated here. The left side of the break also shows the second diagnostic — horizontal offset. Contiguous portions of the design are out of register with each other, documenting sliding movement on the part of the loose die fragment.

The reverse face of a 1985 Lincoln cent shows a large cud in the southeast quadrant and an arcing, rim-to-rim die crack in the northwest quadrant. Also called a “pre-cud” die crack, it shows neither vertical displacement nor horizontal offset. It simply shows lateral spread. The tenuously connected portion of the die splayed outward, producing a wide crack into which coin metal flowed. This left a jagged raised line on the coin. When the crack is even wider, it is designated an asymmetrical split die.

When horizontal offset or vertical displacement is present and involves the entire margin of the break, the long-standing assumption has been that the die fragment was fully detached. But this conclusion may not always be correct, especially when the signs of movement are modest. Die steel is subject to bending, compression and distortion. This can produce some degree of vertical displacement or horizontal offset even when the die is still in one piece.

Vertical displacement within an intact die can be seen on the illustrated 2007-P Roosevelt dime. It shows a long, curved bilevel die crack on the face struck by the obverse (anvil) die. A later die stage has the same crack connecting with the rim at 6:30 to form what we would ordinarily diagnose as a retained cud. But is it really?

At least seven 2007-P Roosevelt dimes with presumed retained cuds of the obverse (anvil) die are known. Are all of them fully detached? I have my doubts.

Since we can’t directly observe the condition of the die that strikes any coin with a presumed retained cud, we must admit to an element of uncertainty in all but the most severe cases.