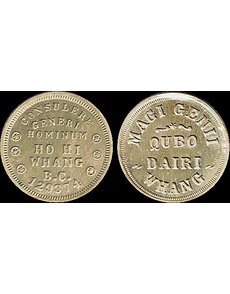 Many collectors have been mystified by the cabalistic inscriptions on a Civil War token known as OH-165-AD-2 (U.S. Civil War Store Cards by George and Melvin Fuld). What do you think?

Numismatics has more mysteries than anyone can easily count. Among these is a Civil War token issued by the Cincinnati shop of John Stanton. During the war, he produced untold millions of cent-sized tokens that were wholesaled to merchants, who passed them along as small change.

Beginning in the second week of July 1862, copper-nickel Flying Eagle and Indian Head cents disappeared from circulation — on the heels of hoarders scrambling at first to acquire gold coins as “hard money,” then silver coins. By summer the only coins in circulation were cents, before they too were hoarded.

Collectors scrambled to acquire the private copper tokens issued as substitutes for the hoarded cents, and by 1863 interest was intense nationwide. The various coiners accommodated numismatists by making special strikings in other metals, including copper-nickel, white metal and silver.

The token described by George and Melvin Fuld in U.S. Civil War Store Cards as OH-165-AD-2 has been a puzzle to many collectors for a long time. The words have no obvious connection with each other, but most are pronounceable — not random letters. The obverse includes CONSULERE / GENERI / HOMINUM / HO HI / WHANG / B.C. / 129374. The reverse bears MAGI GENII / QUBO DAIRI / WHANG.

The Fulds considered them to be magicians’ tokens. It has also been suggested that these were practice pieces for apprentice diesinkers in the Stanton shop.

In the auction of the C.W. Idell Collection, Bangs & Co., New York, Jan. 8 and 9, 1878, cataloger E.J. Attinelli described under Lot 624 the lettering of this token and stated that the token was “a poke at coin collectors.” Similarly, in The Numismatist, December 1899, Benjamin P. Wright in his “American Store or Business Cards” stated the token was “a satirical issue directed against coin collectors.”

The words may be mostly nonsense, although consuleri, generi, and hominem (sic) were widely used in Latin texts. Dairi describes a bronze image of Buddha. Magi and genii have connotations of magic, perhaps inspiring the comment by the Fulds. B.C. may relate to the dating of certain ancient coins. Whang appears in many contexts in the 1860s and earlier, ranging from a proper name to a large quantity of anything such as a whang of cheese or coal. Perhaps in the 1860s a “whang” of 129,374 tokens was imagined.

For me the mystery is solved: a satire on collectors as stated years ago, but seemingly forgotten in the meantime.