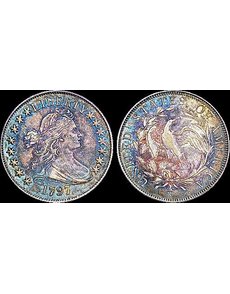 An interest in the series that features this 1797 Draped Bust, Small Eagle half dollar led researcher Jon Amato to write a book about the two-year series. This Professional Coin Grading Service About Uncirculated 58 coin realized $253,000 in a 2010 auction.

My interest in numismatic research began in the early 1980s when I was assembling a type set of U.S. coins.

It was evident in my survey of the numismatic literature that considerably more information was available on some coin types (such as the early large cents) than on others. My research into my favorite design type, the Draped Bust, Small Eagle half dollars of 1796 to 1797, revealed little written information. In early 2001, I therefore decided to write a book on this low-mintage (3,918 pieces) two-year type coin, the key to completing a U.S. type collection (except for perhaps the 1796 Capped Bust No Stars and 1808 Capped Draped Bust gold quarter eagles).

The resultant publication, The Draped Bust Half Dollars of 1796-1797: Numismatic Background and Census, was edited by James Halperin and Mark Van Winkle, and published by Ivy Press.

The major goal of the study was to compile a census, if only preliminary, of the known examples of 1796 to 1797 half dollars. A secondary goal was to examine the economic and historical contexts within which these coins were designed and minted, and circulated in the channels of commerce.

Locating auction catalogs that included imaged appearances of 1796 to 1797 half dollars was the first challenge. The American Numismatic Society library was the starting point for this endeavor. With librarian Frank Campbell’s help, I was able to survey most catalogs of American numismatic sales in the ANS Collection, noting those that contained images of 1796 to 1797 half dollars. I then began purchasing catalogs with the appropriate images from numismatic literature dealers. Karl Moulton, Bryce Brown, David Sklow, George Kolbe, David Fanning, Charles Davis and Fred Lake all helped me create (and continue to create) my extensive library of such auction catalogs.

Once a critical mass of catalogs was assembled, I began the long, laborious and often tedious process of comparing images of 1796 to 1797 half dollar appearances (by Overton variety, if possible) in an effort to identify distinct specimens. Catalog images were supplemented by those from fixed-price lists, which I obtained from monitoring dealer ads in numismatic publications and on their websites. The analysis of 1796 to 1797 half dollar images from these sources resulted in 270 apparently separate specimens documented in the book.

The resultant publication is but one step in an effort to determine the number of known 1796 to 1797 Draped Bust, Small Eagle half dollars. In other words, I view this as an ongoing, lifelong project, for which Heritage Auctions set up a Web page (www.HA.com/JonAmato). “New discovery” specimens obtained from private collectors, auction sales or dealers will be periodically posted on the page, as will auction prices realized, dealer fixed prices, revised pedigrees and any other appropriate information on 1796 to 1797 half dollars.

Jon Amato retired as a cataloger from Heritage Auctions in 2010, but still catalogs part time for the company.