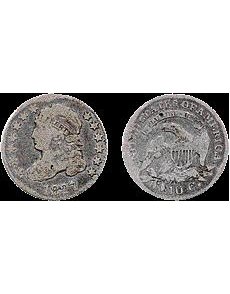 A collector who acquired a group of unattributed Bust dimes early in 2011 recently received confirmation that one of the coins, shown, is only the second known example of the JR-14 variety of 1827 Capped Bust dime. The discovery piece was reported in September 2010.

A second example of the previously unique John Reich 14 variety of 1827 Capped Bust dime was reported in the Jan. 1 issue of JR Newsletter, the weekly email newsletter of the John Reich Collectors Society.

The 2011 find, grading Very Good 8, was brought to the Jan. 5 to 8 Florida United Numismatists convention in Orlando for display by Pennsylvania dealer Rich Uhrich on behalf of an anonymous client.

Uhrich said the December 2011 discovery was to be submitted to Professional Coin Grading Service for certification and encapsulation after the convention. While the coin’s value is unknown, Uhrich said Jan. 3 that his client currently plans to hold on to the coin.

Uhrich said he was contacted in December by a collector who had purchased a quantity of Bust dimes early in the year that were unattributed as to die variety. Uhrich said he was contacted by the collector after the owner was unable to match the diagnostics of an 1827 Capped Bust dime from the purchase to any of the 13 varieties identified in Early United States Dimes 1796-1837, published in 1984.

The collector first described to Uhrich in a telephone conversation the 1827 dime’s characteristics, which Uhrich believed a match to the JR-14 discovery piece. The collector shipped the coin to Uhrich for physical inspection, and Uhrich took photos and forwarded them by email to Bradley S. Karoleff, who confirmed Uhrich’s suspicions that the coin was a second known example, Karoleff said Jan. 3. Karoleff is currently JRCS president and also editor of the John Reich Journal.

The first piece discovered is in Very Fine 30 and in a private collection. Although not certified and encapsulated by a third-party grading service, the discovery piece was confirmed as a new variety on Nov. 15, 2010, by McCloskey, as well as Karoleff.

When McCloskey and Karoleff confirmed the identity of a new dime die variety in 2010, the coin was assigned the JR-14 catalog number using the system in the standard reference book.

Obverse 1, used for only the 1827 JR-1 and JR-14 marriages, is one of nine known obverses. Exclusive to Obverse 1 is evidence of recutting of the 7 in the date.

Reverse B is distinguished in part by the location of the scroll containing the motto E PLURIBUS UNUM, which appears further right than on any of the other nine reverses. The scroll ends below the right edge of the right upright of the M in AMERICA.