The Joys of Collecting: Fuld books written to fill voids 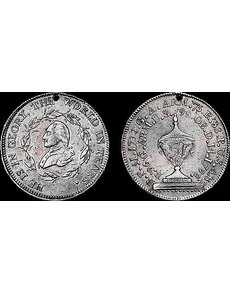 Perhaps apt to illustrate here is a holed George Washington funeral medal by Jacob Perkins, 1800. Washington tokens were a prime focus for George Fuld, who updated the standard reference (published in 1885) on the subject.

I and more than 40 other friends created a memorial notice for Dr. George J. Fuld that ran in the Nov. 11 Coin World. One thing that George was not was a publicity hound. Try as I might, I could find only two photographs of him in my files. George defined modesty.

I met George when I was a teenager in high school. I spent a lot of time reading everything I could in back issues of The Numismatist, The Numismatic Scrapbook Magazine, the American Journal of Numismatics and in reference books. I soon learned that if I had a question on just about anything, he could either help or point me in the right direction.

In 1957, George, several others and I contemplated that most rare coin dealers were interested only in sales and had no interest in research. This was quite different from generations earlier when such dealers as Sylvester S. Crosby, W.E. Woodward, Lyman H. Low, Wayte Raymond, Edgar H. Adams and others contributed immensely to that area. We were all youngsters, so to speak.

George was especially interested in the field of tokens and medals. Civil War tokens were his first love. With virtually no competition in the 1940s and 1950s he built an incredible collection and acquired countless thousands of duplicates. No current reference books existed as he collected, so he co-wrote them: one on store cards, the other on patriotic tokens.

Washington tokens and medals were another focus. The most recent reference was written by W.S. Baker in 1885. It was time for a new one, so George wrote it. He retained Baker number attributions rather than using his own name. The door swung both ways, and Russ Rulau and I helped with recent editions. Not long ago, George’s book on Washington tokens by Peter Getz was published.

Out-of-print catalogs and reference books were another love. Should the Numismatic Bibliomania Society create a Hall of Fame, George’s name would be high on the list.

Last summer, he wrote a fascinating reminiscence of his life for the recently published Whitman Guide Book of Civil War Tokens. We had many conversations in the course of finessing it.

In a more recent conversation, I asked him if he was going to attend the Whitman Coins & Collectibles Expo in Philadelphia in September. He said that his retirement home, with wife, Doris, was very comfortable, but his range now, with a walker, was limited to about a hundred feet.

George will always be a fond part of my memories.