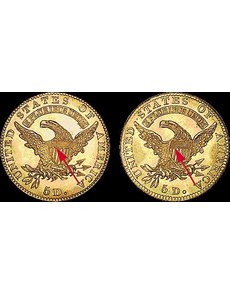 Reverse A, left, which was paired with the 1825/4 Capped Head half eagle obverse dies creating the BD-1A and BD-2A varieties, exhibits a prominent die centering dot visible in the upper left part of the eagle’s shield, shown by arrow. In same area on the 1820 Reverse D die employed for the newly identified 1825/4 BD-3 variety, the die centering die is missing, among other differences. 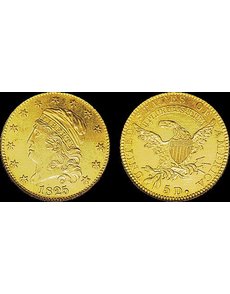 The newly identified variety of 1825 Capped Head $5 half eagle went unnoticed as something special when offered at auction in 1996 as part of the Byron Reed Collection, and again in 2007 in a Heritage Auctions sale.

A new die marriage for 1825 Capped Head gold $5 half eagles has been discovered through an Internet search of auction records, 188 years after the coin’s production.

Research into the variety has both identified a reverse die not previously identified as being used with an 1825 obverse die, and also more accurately identified two different digits underlying the 5 in the date (the coin is also an overdate).

Because identification of the variety has been verified strictly from images available online and not the actual coin, it’s likely the coin’s current owner, whose identity is not publicly known, is unaware the coin he possesses is currently unique.

The variety was recently discovered by collector David Kenny among the auction archives of Heritage Auctions from a 2007 sale. It represents the first new half eagle variety of any date reported since the 2006 publication of Early U.S. Gold Coin Varieties: A Study of Die States, 1795-1834, by John Dannreuther and Harry Bass Jr., in which Dannreuther speculated on the variety’s existence.

What Kenny suspected through his recent research, and Dannreuther subsequently confirmed, is that the reverse die leading to the new attribution is the die (Reverse D) first used for the 1820 Capped Head, Large Letters Reverse half eagle variety.

“It is not known why this reverse die was not used in 1825, as both varieties of that year use a new Small Letters reverse die. Again, it appears the Mint pressmen randomly selected reverse dies — and sometimes — obverse dies,” Dannreuther wrote in a footnote in the 2006 reference.

New research has also clarified the overdate found on the coin. Previously, the 5’s underdigit had been separately identified as a 1 and a 4. Now, the coin is identified as having both a 1 and a 4 beneath the 5.

Until the publication of the Bass-Dannreuther reference in 2006, the 5 in the date was believed to have been punched over a 1. Dannreuther’s research for the 2006 book concluded the 5 was punched over a 4, making the overdate an 1825/4, not the previously held 1825/1.

However, using Kenny’s discovery, researcher Saul Teichman has proven the obverse die for the variety was a leftover, previously used 1821 obverse, according to Dannreuther. “It was overdated with a 4 and not used. Then a 5 was punched over the 4 and 1. Thus, [the coin has a date of] 1825/4/1,” Dannreuther said Dec. 20. The 1825/4/1 die was used for the BD-1 and BD-3 varieties. The BD-2 variety uses a different 1825/4 die, Dannreuther said.

Find of a lifetime

Kenny, 66, has collected coins and other numismatic items on and off since he was seven years of age, but he has been almost completely out of the hobby the past 10 years. Nonetheless, he stumbled across the new die marriage somewhat by accident. It is a discovery, however, that Kenny considers to be the highlight of his numismatic career.

Also a dealer in Asian art, Kenny said his numismatic focus in the 1990s moved from U.S. coins to Renaissance medals. After a more than 10-year hiatus from coin collecting, Kenny said he decided to get back into collecting U.S. gold coins, specifically $10 eagles, but at their current prices, he considered them cost prohibitive.

A dealer friend suggested half eagles. Kenny said he narrowed his focus even further to concentrate on a representative type set of overdates and varieties.

The coin was certified Mint State 61 by Numismatic Guaranty Corp., and the attribution in the auction lot description for Lot 3538, but not on the grading insert, was BD-1. The overdate was listed as 1825/1.

Both of the previous two known varieties of 1825 Capped Head half eagles used a Small Letters variety die, Reverse A, which has a prominent die centering dot visible in the upper left part of the eagle’s shield, according to Dannreuther.

Kenny noticed the die centering dot was absent from the images of the coin as promoted for the 2007 Heritage auction, helping to lead to the identification of the reverse as bearing Large Letters inscriptions.

“This raises some interesting questions as to the emission sequence for the half eagles of 1825 and 1826, a subject, no doubt, that will entail some further exploration,” Dannreuther said.

As a result of Kenny’s discovery, researchers have now identified 144 different known varieties of U.S. half eagles that were minted prior to the reduction of gold content introduced by act of Congress on June 8, 1834, according to Dannreuther.

The coin used in making the discovery was once part of the Byron Reed Collection, once owned by the city of Omaha, Neb. To benefit the Western Heritage Museum, the city of Omaha sold much of the collection, including the identified discovery variety and other coins and historical materials, in an Oct. 8 and 9, 1996, auction by Spink America/Christie’s.

The 1825/4/1 variety designated BD-3 is currently unique. This variety, if it remains unique, is the seventh unique variety pairing for half eagles dated 1795 through 1834 Capped Head, With Motto $5 coin, according to Dannreuther.