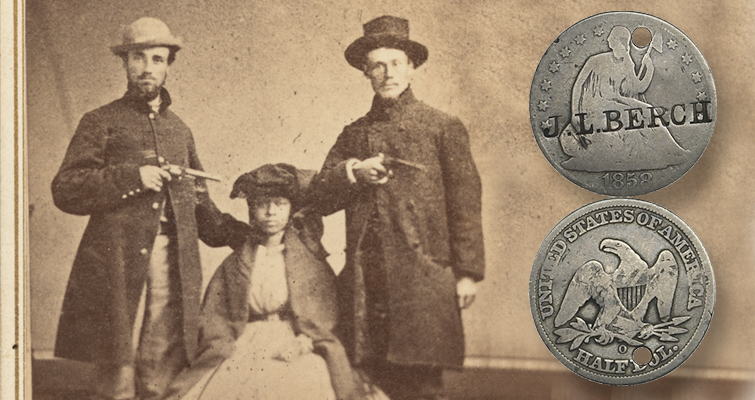 An 1858-O Seated Liberty half dollar is counterstamped with “J.L. Berch,” which could be the name of Civil War soldier Jesse L. Berch of Wisconsin. Berch, left, and Corp. Frank Rockwell, right, helped rescue a female slave, middle, who was disguised as a “soldier boy” from Kentucky during the effort.

If Hollywood had written the script, a highlight from Numismatic Auctions LLC’s summer auction would have turned out to be a Civil War “dog tag.”

But, Coin World is in Ohio, and the auction firm is in Michigan, and Hollywood is thousands of miles away from both of those states.

As a collector and writer, I cling to the pieces that tell an amazing story.

A most common idle thought among collectors is to wonder who held the coins that they now own. Where did this coin travel? What did it buy? Was it lost, to the dismay of the owner, or was it collected and protected with care, a special token of an event in life or death?

But sometimes stories are not to be as fantastic as you wish them to be.

That was the case with an 1858-O Seated Liberty half dollar in the aforementioned auction.

The briefest of lot description teased for further exploration.

The holed coin bears the name J.L. Berch across the obverse. According to cataloger Steve Davis, the host coin is toned but in Very Good condition, while the countermark is Extremely Fine.

The only other line about the lot was pregnant with possibility.

“A little research might yield the background of Berch,” it read.

Searching for a story

In search of a fantastic story, I began digging.

Davis said the item was “a real beater, [found] at the bottom of the box of Civil War jewelry. It looks legit but I’m going to let the researchers sort it out.”

Examples of coins that served in a military capacity as a Civil War “dog tag” are real but extremely scarce and often misrepresented.

I was surprised that a New Orleans Mint struck coin would be associated with a Northerner. We know that, in general, circulation patterns suggest coins circulate predominantly nearest to the Mint that struck them.

It sure has been true for the 20th century but was even more so when the country wasn’t hyperconnected as it is today.

Could this item really have served as a “dog tag” for a Civil War soldier? What a story that would be! An artifact of the pivotal American conflict, traced to the soldier who owned it!

I reached out to Nancy Dearing Rossbacher, editor of North South Trader’s Civil War Magazine, and author of a treatise about the abundance of questionable pieces that flood the market.

She confirmed that there was a Civil War soldier (a quartermaster) by the name of Jesse L. Berch, the only name to match the countermarked name in all three initials.

A quick search of the soldier’s name revealed a listing at the Library of Congress website.

Jesse L. Berch and a fellow soldier were involved in a rescue of at least one slave.

The 22nd Wisconsin was known as the Abolition Regiment, according to Julia Pferdehirt in Freedom Train North: Stories of the Underground Railroad in Wisconsin.

According to Pferdehirt, Berch and Corp. Frank Rockwell escorted a “soldier boy” (who was actually a female slave) some 100 miles to freedom, to famed abolitionists Levi and Catherine Coffin in Cincinnati.

According to research shared by Rossbacher, Berch died in Jackson, Mich., in 1887, in his late 40s, and is buried in Racine, Wis., his hometown.

Was there any special meaning to the date of the coin?

Rossbacher wrote: “Out of curiosity I checked to see if 1858 had significance to him, but didn’t immediately see a bingo. He was married in ’61, and all of his known children’s births postdated that. Looks like both parents outlived him, so it’s not that.”

Davis confirmed that the estate in which the coin was found was within 20 miles of Jackson, Mich. It had been in the same family for some 90 years, after being acquired by a family member.

While nothing so far conclusively proves that the piece was once owned by Jesse L. Berch of the Abolition Regiment, research indicates a very strong likelihood.

But what is it? How should it be classified?

Civil War token specialist Steve Hayden agreed that the piece was not a Civil War “dog tag.” But, if the piece is not a soldier’s ID tag, what is it?

Hayden said: “I would just call this a counterstamped coin. It doesn’t have any of the unit information or hometown that would make it useful as a dog tag to identify the soldier.”

Rossbacher suggested that it could have served as a watch fob. “Because it doesn’t have a distinct military reference, many Civil War collectors wouldn’t get excited about it — and thanks to the falsely inscribed and stamped pieces of this ilk, many would bypass it outright,” Rossbacher wrote.

Its real worth, and potential connection to a slave-rescuing soldier from the North, may never be quantified.