Rep. Paul says Mint will get its turn to testify 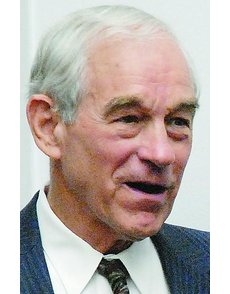 Subcommittee Chairman Ron Paul says the U.S. Mint will have its turn to testify before Congress about how it operates bullion coin programs and what it is doing to deal with problems such as planchet shortages.

“What we’re working on is formulating the real questions that we need to pressure them on,” Paul explained April 6 during an exclusive interview with Coin World.

Paul became chairman of the House Financial Services Subcommittee on Domestic Monetary Policy and Technology in January when Republicans gained control of the House of Representatives.

He moved quickly to begin a probe of problems the U.S. Mint has had in the last three years in keeping pace with demand for its silver, gold and platinum bullion coins, holding an April 7 hearing.

The hearing featured four representatives from the numismatic community, who were invited to identify problems and offer suggestions on how the U.S. Mint could improve its bullion coin operations and marketing.

Paul departed from the usual format, which invites agency heads to testify during the same hearing as those from the private sector. In the past Mint officials have made statements or presentations first and then left while other witnesses presented testimony.

Paul said members of the subcommittee “want to try to understand the shortages” and their ramifications in the marketplace. He added that he needs to understand why the Mint “can’t be more efficient” and why it has limited mintages in various programs.

He did not specify a date for Mint testimony but indicated he would prefer that the director of the Mint testify rather than an acting director.

The Mint director is presidentially appointed and must be confirmed by the Senate. Thus far, the Obama administration has not announced a nominee for the position.

Paul noted that his top priority as chairman of the subcommittee is domestic monetary policy. He said he intends to continue drawing attention to the Federal Reserve’s policies and what he perceives to be the negative consequences of actions such as “quantitative easing,” which he deems to be inflationary and a major factor in devaluing the U.S. dollar.

However, he was quick point out that the subcommittee has oversight responsibility for the U.S. Mint and the Bureau of Engraving and Printing, and that matters involving coinage will also be given high priority during his chairmanship.

Paul is one of the most knowledgeable members of Congress about coinage ever to chair the subcommittee.

He said he purchased his first gold coin, a Mexican 50-peso piece, bearing a 1947 date, in the early 1970s before the United States lifted its ban on private ownership of gold. He began as a collector, but in the early 1980s changed his focus to “hard assets” and bullion coins.

Paul was first elected to the House of Representatives from the 22nd District of Texas in a special election in April 1976; was defeated in November of that year; and won his seat back in 1978. He voluntarily left politics in 1984 and returned to a full-time medical career. Paul was elected to his former seat in 1996 and is now in his 12th term.

During his 12-year return to the private sector, in addition to his obstetrics practice, Paul ventured into the coin business. His firm, Ron Paul Coins, specialized in hard assets, and he worked with veteran numismatist Burt Blumert of Camino Coin in Burlingame, Calif.

“It fit into my philosophy of monetary history. If you’re buying an ounce of gold, you understand why gold is money. The gold market is a way to evaluate the health of the dollar,” he noted in a 2008 interview published in Coin World.

In 1981, Paul was among the first members of Congress appointed to the newly formed U.S. Gold Commission, which studied whether the United States should link its monetary system to gold, a step Paul strongly favored.

To combat the anti-gold forces, Paul introduced legislation in the House on April 1, 1982, that sought to authorize four denominations of gold coins: an eagle, a half eagle, a quarter eagle and a tenth eagle. The measure specified the 1908 Saint-Gaudens $20 double eagle design on the obverse and the Heraldic Eagle of the Great Seal of the United States on the reverse. It failed to gain passage.

In 1983 he introduced legislation calling for new legal-tender gold and silver coins and also introduced a bill seeking a return to the gold standard. Neither measure gained passage.

Beginning in 1982, he opposed legislation seeking to ban importation of the South African Krugerrand, as a sanction against that African nation’s apartheid policies. The issue was debated by Congress from 1982 to 1985 until President Reagan banned Krugerrand imports in 1985 through an executive order.

Although he was not the chief sponsor of the legislation authorizing the American Eagle gold bullion coin program that was signed into law Dec. 17, 1985, the gold bullion coins authorized are strikingly similar to what he had proposed in 1982. ¦