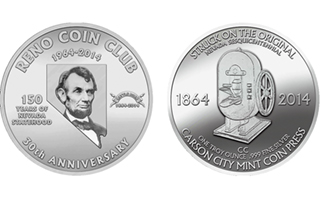 Images courtesy of Nevada Department of Tourism and Cultural Affairs, Division of Museums and History.

The coinage press used to strike the first coins at the Carson City Mint in 1870 will be pressed into service April 25 and 26 to produce prooflike 1-ounce silver medals marking the 30th anniversary of the Reno Coin Club and Nevada’s sesquicentennial anniversary.

The Nevada State Museum in Carson City, on the site of the original Carson City Mint from 1870 to 1893, will strike the .999 fine silver medals both days from 10 a.m. to noon Pacific Time and again from 1 to 3 p.m.

The museum and coin club are collaborating for the 91st observance of National Coin Week from April 20 to 26.

Felicia Archer, public information officer for the Nevada Department of Tourism and Cultural Affairs, said a maximum of 90 of the 38.1-millimeter medals will be struck on Historic Coin Press No. 1. Robert Nylen, curator of history for the museum, said the silver medals can be purchased at the press for $65.

Archer said April 8 that the coin club also intends to mint some brass and copper medallions of the same design, although the design will lack an indication of the fineness of the metal.

The copper and bronze medals will be struck by a private minter. Archer said mintage limits for the brass or copper versions of the medal have not been announced.

Historic Coin Press No. 1, located in the Old Mint Building portion of the Nevada State Museum, was first placed into service Feb. 11, 1870.

The first coin struck on the press was an 1870-CC Seated Liberty dollar. For nearly a quarter of a century the press was used to strike most of the larger denomination pieces produced from 1870 to 1885 and again from 1889 to 1893.

The press is now used to strike Nevada commemorative medals in gold, silver, copper and bronze.

The coinage press is currently being operated and maintained for the museum by volunteers Ken and Karen Hopple from Reno.

Under the Hopples’ supervision, the press is in operation the last Friday of each month.