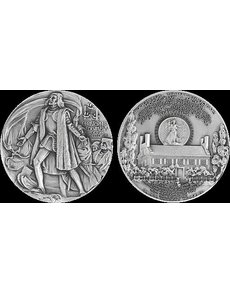 The Secret Service took a dim view of dealer Toivo Johnson’s medallic tribute to Augustus Saint-Gaudens. The reverse of the medal depicts Saint-Gaudens’ obverse from the gold $20 double eagle of 1907 to 1933.

Nothing is ever entirely forgotten in numismatics, not even the short-lived medal boom begun by the 1961 inauguration medal of John F. Kennedy, designed by the great sculptor Paul Manship, chosen by new first lady Jacqueline Kennedy who knew his earlier work from college studies.

Presidential Art Medals soon branched out into many other areas with great success, bringing imitators devoted to state capitals, presidents and first ladies, heroes of peace, presidents-states combined, Civil War battles and the Hall of Fame for Great Americans at New York University series in three sizes and two metals.

One of the most startling relics of the medallic boom has recently attracted some attention in specialized collector literature: the U.S. Mint coin designers’ series of the late Toivo Johnson.

Johnson was a Finnish-American from “Down East” Maine. An active coin dealer during the commemorative coin boom of 1936, he remained a significant player in the field thereafter. His medals would have honored coin and medal designs by such greats as Augustus Saint-Gaudens, Victor D. Brenner, James B. Longacre, Christian Gobrecht and Charles E. Barber. Johnson planned to simply copy classic coin and medal designs, gaining a finished product at minimal cost. Medallic Art Co. in New York refused both concept and contract, so Johnson headed to Rochester, where Metal Arts Co. agreed to a contract.

Designs were created by mechanical pantograph operator Robert Schabel, and medals were struck in 76-millimeter diameter in .999 silver and bronze.

The first medal (of six in the series that were issued) honored Saint-Gaudens with a replica of the obverse of his double eagle rising over Aspet, his New Hampshire studio-home. The reverse copied the sculptor’s 1893 Landing of Columbus obverse from the World’s Columbian Exposition Award Medal.

The Secret Service took a dim view of the coin imitation and after a stern interview, Johnson abandoned further coin copying. Sales were never strong and soon evaporated, leaving quantities of unsold remainders. It is probable that most collectors found the designs busy, cluttered and unappealing. Indeed, most modern collectors first viewing them express amazement that such medals could ever have existed.