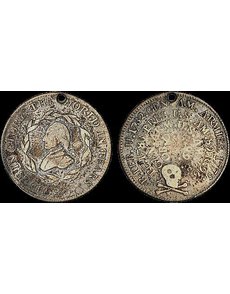 The popular Skull and Crossbones type of Washington Funeral medal has George Washington’s date of death at center on the reverse (below U.S.) as Dec. 15, 1799, instead of the documented date of Dec. 14.

December. It’s a time to pull our families close, bundle up against the cold and celebrate the holidays. It’s a great time of year for eggnog, gift giving, warm fireplaces and year-end sentimentality.

It is, however, a terrible time to go riding all over your estate in a pouring, freezing rain.

We know that foul weather didn’t kill George Washington. It seems after his long, wet, cold ride on Dec. 12, 1799, he ended up with a sore throat. It could have been a common cold, the kind of thing we attack with Ny-Quil and cough drops for a few days before it goes on its way. His doctors, charged with making him feel better, offered more and more unpleasant treatments and bled him of perhaps a third of his blood, which weakened him enough to kill him on Dec. 14, 1799.

Very few dates are as widely commemorated numismatically as Dec. 14, 1799. Among American historical dates, July 4, 1776, would probably earn first rank if anyone was to sit down and count, and Washington’s birthday may even rank second, but undoubtedly the day of his death would not be far behind.

The most obvious commemoratives are the Washington Funeral medals, struck by Jacob Perkins for use in Washington memorial events in Boston in February 1800.

The most common of several types, depicting a funeral urn on the reverse, renders his death date as “OB. D.14.1799,” short for “obit” or “died” in Latin. The very scarce oval Funeral medals present his death date the same way, though the popular Skull and Crossbones type actually gets the date wrong — they say Dec. 15 instead of 14.

At first thought, this may seem to be an old-style date from the Julian calendar (last used in 1752 in England), but it’s actually just plain incorrect. The Washington Fame medal of 1803 also states the date as Dec. 21, while the ca. 1840 “Ugly Head” Washington medal states the day of Washington’s death as either Dec. 12 or Dec. 17, depending upon who is reading it.

Among the other medals that focus on the exact day that Washington died are the 1800 Hero of Freedom medal (Baker 79), the 1800 Westwood medal (Baker 80), the rare 1800 Victor Sine Clade medal and dozens more struck later in the 19th century.