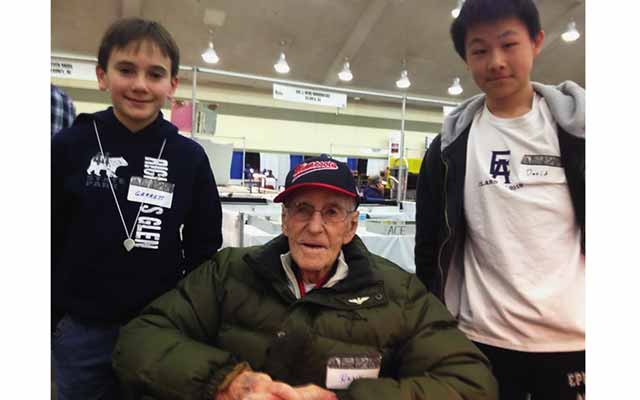 Henry “Hank” Schab, one of the founders of the Colonial Coin Club of Annapolis, is shown with Young Numismatists Garrett Ziss, left, and David Huang, right.

One of the chief distinguishing characteristics of the Colonial coin specialty is the sense of community it engenders. Led by the Colonial Coin Collectors Club, collectors of all stripes who enjoy early American coins find that socializing and sharing their enthusiasm with other like-minded folks is even more enjoyable than owning the coins themselves.

The Colonial coin community lost one of its unsung heroes last month. Henry “Hank” Schab passed away in June, just a day shy of his 99th birthday.

He was among the founders of perhaps the first ever coin club with “Colonial” in its name, the Colonial Coin Club of Annapolis, Md., the local club in the hometown he adopted just after his service in World War II.

Hank was well-known around Annapolis for his love of the history of the bayside town. He could often be seen, well past the age when other people preferred an easy chair, dressed in Colonial garb giving tours around the historic downtown. His love for Annapolis inspired his greatest contribution to the world of numismatics, publication of “The Life and Coins of John Chalmers” in The Numismatist in April 1984.

Chasing down research avenues that no numismatist had ever pursued, Hank brought John Chalmers to life, animating a name known to all but a personality known to none.

For the rest of his days, Hank kept careful track of the auction appearance of every Chalmers shilling, sixpence, and threepence he could find, bringing a naval officer and engineer’s sense of order and discipline and a hobbyist’s passion to his studies.

The coins Chalmers struck in 1783 remain the best known products of the picturesque town to this day. Inspired by my surroundings after I moved to Annapolis over a decade ago, I started pursuing research on John Chalmers and discovered that every publication owed their facts to Schab’s research. I looked Hank up in the phone book and called him out of the blue. He generously invited me to his home to look at his research materials and coins.

We pored over his notes, still lovingly maintained despite publication some 20 years earlier, and we became friends.

After moving out of Annapolis, I’d still occasionally see Hank at Baltimore shows.

At one of the shows, fellow Colonial dealer Tony Terranova put the only type of Chalmers coin Hank never owned in his 97-year-old hands, the 1783 Rings shilling, one of five known.

His hands may have shown his age, but the look on his face showed the childlike love of these coins that begat the research work that will long outlive us all.