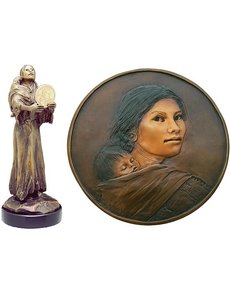 Garrett has become the exclusive distributor for sculptor Glenna Goodacre’s 6-inch bronze relief of the adopted Sacagawea dollar obverse design and a 7-inch bronze statue, The Offering, showing Sacagawea with her infant son, Jean-Baptiste, as she looks skyward while holding a rendition of her dollar likeness. 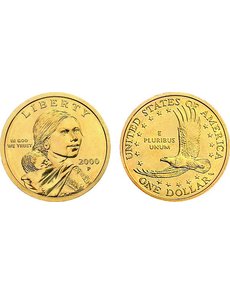 Shown is the obverse and reverse of one of the dozen 2000-P Goodacre presentation dollars from Garrett that PCGS graded Specimen 69 and encapsulated. PCGS has certified 31 examples as Specimen 69. 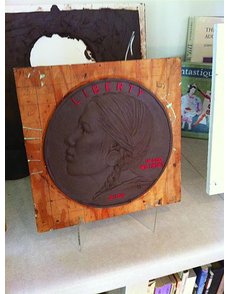 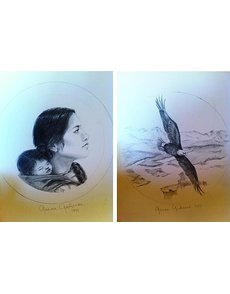 Among the items that Goodacre donated to the National Numismatic Collection at the Smithsonian Institution’s Museum of American History in Washington, D.C., were these design sketches proposed for the obverse and reverse of the Sacagawea dollar. 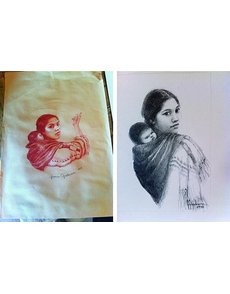 Additional design sketches proposed for the Sacagawea dollar obverse and included in Goodacre’s donation to the Smithsonian are these obverse designs. 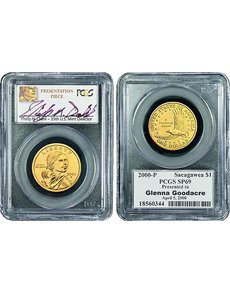 Nearly 2,000 of the remaining specially produced 2000-P Sacagawea dollars from among the 5,000 that sculptor Glenna Goodacre was presented as compensation for her adopted Sacagawea dollar obverse design were acquired in 2010 by Kentucky dealer Jeff Garrett.

Garrett, owner of Mid-American Rare Coin Gallery in Lexington, had the coins removed from the Independent Coin Grading holders originally encapsulating them and had them resealed in Professional Coin Grading Service holders with grading inserts pedigreeing the coins to Goodacre.

Garrett has since dispersed the PCGS-encapsulated coins into the market through dealers, except for a small number he retained for his personal collection.

Garrett did not disclose his acquisition price.

Goodacre received her $5,000 design payment in Sacagawea dollars when the coins were delivered to her on April 5, 2000, in Santa Fe, N.M., by U.S. Mint Director Philip N. Diehl and other Mint personnel.

All 5,000 presentation coins that Goodacre received were graded with Mint State grades by ICG.

The Goodacre presentation coins bear distinctive surfaces. Most of the planchets were specially burnished before striking at the Philadelphia Mint so their surfaces exhibit a texture unlike any other Sacagawea dollars.

The dollars are more prooflike than Uncirculated in appearance.

Each coin was also protected with a proprietary anti-oxidant to maintain the coin’s appearance by inhibiting tarnish.

ICG graders believed that some of the presentation coins missed the burnishing treatment.

Shortly after she received the coins, Goodacre kept the first 2,000 coins graded and sold the remainder of the coins into the market for $200 each. Examples have since been resold at many multiples of that figure.

Fewer than two dozen of the roughly 2,000 encapsulated coins Goodacre retained were distributed to family members.

PCGS assigned Specimen grades to the coins it graded for Garrett, as well as for other owners earlier, because of the special striking and handling the pieces received.

Included as part of the arrangement for PCGS encapsulating the Goodacre presentation coins for Garrett, Diehl signed all of the inserts encapsulated in the PCGS holders for the coins Garrett acquired.

After reading an article in the March 8, 2010, Coin World Special Edition, Garrett wondered what happened to the remaining approximately 2,000 dollars that Goodacre retained.

Garrett said he traveled to Santa Fe in June 2010 to meet with Goodacre and Anthony in her home. He found that the coins had been stored for the past 11 years in a temperature and humidity controlled wine cellar.

Garrett acquired the coins for a price he would not disclose and submitted them to PCGS, where Miles Standish, PCGS vice president and senior grader, designed the holder and its insert, and had Diehl sign the inserts.

In addition to the presentation coins he acquired, Garrett said he is also the exclusive distributor for the remaining limited edition 6-inch diameter bronze reliefs depicting the Sacagawea dollar obverse design, and a 7-inch tall bronze statue, The Offering, showing Sacagawea with her infant son, Jean-Baptiste, as she looks skyward.

In a related mater, Goodacre has donated design sketches proposed for the Sacagawea dollar along with models and plasters to the National Numismatic Collection at the Smithsonian Institution’s Museum of American History.

Goodacre had previously donated other material associated with the Sacagawea dollar to several other museums.

Garrett said when he met with Goodacre and Anthony to discuss the purchase of the presentation coins, after the deal was finalized, Goodacre asked him if he could suggest a museum or similar facility to accept the sketches, models and plasters, since she was deaccessioning items in her studio.

Because of his association with the Smithsonian and his support for the National Numismatic Collection, Garrett recommended the materials go there, and Goodacre agreed. ¦