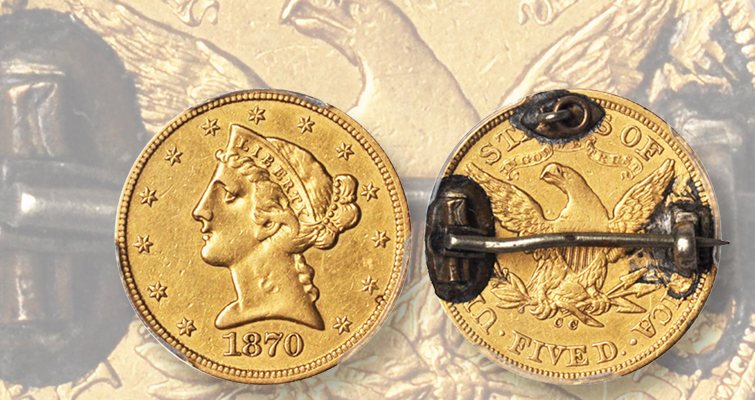 This 1870-CC Coronet gold $5 eagle was transformed into a pin and a pendant, and the mutilation made it an affordable example of a rare issue in the series. The Extremely Fine Details piece sold for $4,560 on June 21.

Here is a very different item, from Session 1 on June 21, that illustrates one of the sale's different entry points for purchasing a rarity.

The obverse of this 1870-CC Coronet $5 half eagle is serviceable enough, with its slightly glossy surfaces and rich gold color. But things get problematic when it is flipped over and one sees both a hanger and pin clasp crudely attached to the reverse. Stack’s Bowers calls this 1870-CC $5 coin “interesting” and Professional Coin Grading Service graded it Extremely Fine Details, Mounted, placing it in an oversized holder to accommodate the coin in its current form as an object of adornment.

With its low mintage of just 7,676 pieces, the issue is well-known as the rarest Carson City Mint Coronet half eagle, and today around 100 are estimated to survive. The catalog points out the obvious, writing, “Although not a perfect example from a numismatic perspective, the opportunity to acquire any 1870-CC half eagle deserves serious consideration among Carson City Mint enthusiasts.” It sold for $4,560, providing an entry level representative of this popular key issue.